Yes, pegboards are utilitarian – but now they’re stylish, too

THE WASHINGTON POST – Pegboards have long been organisational mainstays in sheds and garages. But recently, the compressed wood boards once reserved for corralling screwdrivers and gardening shears have been popping up in other parts of the home, including kitchens, laundry rooms, offices and playrooms.

“From that utilitarian who-cares-how-it-looks approach, where it was strictly about its functionality, it really morphed into a decor statement, where it’s the perfect marriage of something that looks cool and fun, but also is very functional,” said editor at Better Homes and Gardens Amy Panos.

Pegboards with curated displays and decorative touches allow people to turn a useful piece into something that reflects their personal style.

And, of course, it’s satisfying to see your belongings presented in an organised and appealing way. “It feels good, and it’s a serotonin boost,” Panos said.

Here are tips from design experts on where – and how – to use pegboards in your home. 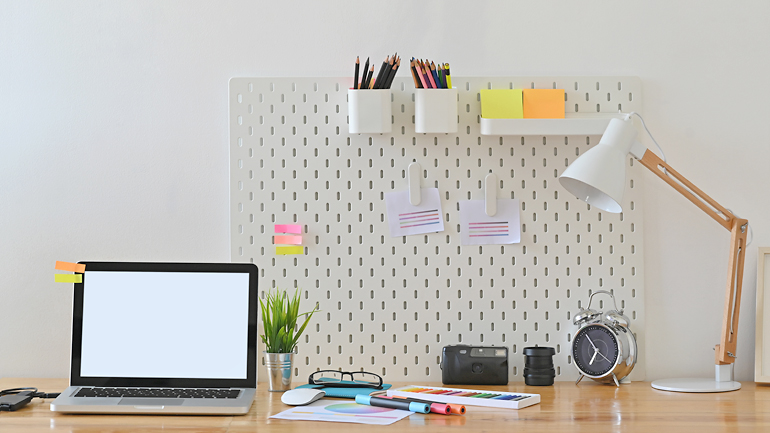 Lauren Shaver of Bless’er House painted a pegboard in her small combination laundry room/mudroom white, then added metal baskets for cleaning supplies and hooks for dustpans and brooms.

To dress up pegboards from hardware stores, Shaver suggested painting them black or navy and using copper hooks and baskets. “It’s then got that luxe masculine look, but it’s glittery and pretty.”

A versatile pegboard wall is ideal for playrooms and children’s bedrooms, Lyon said.

It can change functions – and you can move the pegs higher on the wall – as the kids get older. “It works in all aspects for playrooms and anything dealing with the kid,” he said. “It grows with them.”

“I would use it 100 per cent for toy storage,” said Shaver, who recommended installing the material on a wall in a playroom and using it to hang bins of Legos and more.

Pegboard had a starring role in Julia Child’s Cambridge, Massachusetts, kitchen, now enshrined at the Smithsonian’s National Museum of American History in DC.

She hung her cooking utensils and more from a board painted in a soft shade of blue, with outlines to show where each item went. To mimic Child’s look, Panos recommends tracing pans or utensils lightly with a pencil, then painting a silhouette on the pegboard. “That gives you a visual cue for what goes there,” she said. “And when it’s not there, it just looks cool.”

Pegboard is a “huge space-saver” in home workspaces, Lyon said. “It gets things off the desk. Just add a mail slot and pencil holder. Wrap chargers on it.”

Retailers sell sleek pegboards that can be hung above desks. And DIY projects involving small panels with accessories such as hooks and shelves have been popping up on TikTok.

It can also replace a corkboard; it’s sturdier, and you can attach materials with hooks, clips or bins.

Interior designers are also finding other fun and interesting ways to incorporate pegboards in homes.

For example, Studio Dorion used pegboard to create shutters in a guest room. “We wanted to use a nontraditional light-filtering material for the shutters,” said designer Michelle Ficker.

The larger dowels also increase how much you can use pegboards for, because they can support shelves holding plants or even artwork. “Layer the art on it, do one big piece or a diptych,” Lyon said. Or create a plant wall by clustering greenery on shelves and wrapping vines around the dowels.

Another option is to turn the pegboard itself into art, such as by painting a mural on it or using unusual materials, colours or finishing materials to create visual interest. “You can make it as chic as you want,” Lyon said. “There’s a lot of possibilities for making pegboard look pretty.”