The flash floods which affected most parts of the Sultanate on Thursday night was the worst experienced this year, residents said.

A resident of Kampong Sungai Tilong, one of the worst affected areas, said the water reached knee level, while others said their village had not experienced flash floods similar to the one on Thursday evening.

He said he visited the area for a closer look and checked with the affected residents if they needed any assistance.

One house he visited on Thursday had gone under water due to the blocked drainage and untrimmed grass.

“Due to this, the water did not flow easily causing floods,” Pengiran Haji Ruzaini said.

He said the issue of blocked drainage will be discussed with the Brunei-Muara District Office and arrangements will be made to address the situation. 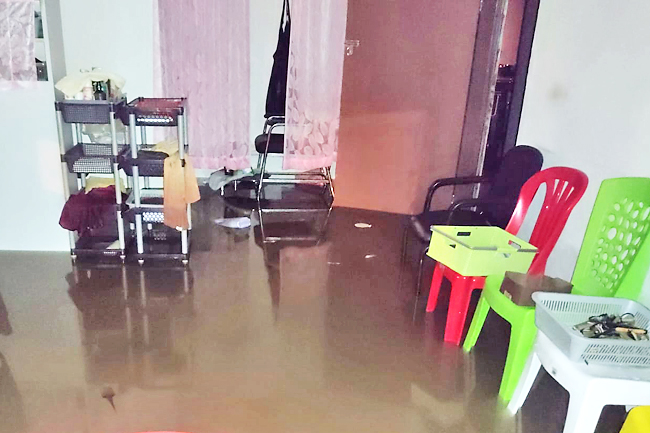 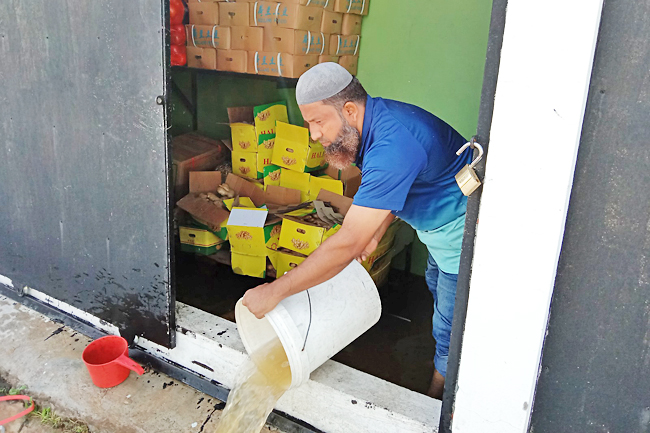 The acting village head also urged residents to clear their drainage so that the water could flow easily and reduce the risk of flash floods, especially in low-lying areas.

Meanwhile, Azimah A, a resident of Kampong Sungai Tilong, said the water entered the house from the kitchen and the carpentry area where her father did woodwork. “The water reached ankle level and we had to move some items to higher ground,” she said.

She said they also experienced a power cut, leaving them in the dark for several hours.

Vance Lee, another resident, said the rain began around 6pm. In 30 minutes, the area was flooded. ”This is the worst flood that I have experienced this year with the water level reaching at least one foot high,” he said, adding that the flooding damaged the motor of the automatic gate at his home.

He requested the authorities to find a solution to the recurring flash floods.

Daya Supermarket in the area was also impacted and was forced to close early to clean up debris left behind by flash floods. A staff member, Mohd Hamzah said flood waters subsided  around midnight.

“Goods at our shop were damaged and we had to work round the clock for our business to open on time in the morning,” said Mohd Hamzah while removing water that destroyed eggs, onions and other food items.

Jeffrey Wong said his sister’s home in the village was also impacted by flash flooding, adding that it was the worst they have experienced in over 40 years of living there.

“The water entered the ground floor. Similar mishaps have occurred in the past as her house is located near the main road. But it was not as catastrophic as on Thursday night,” he said.

Jeffrey added that a nearby salon and a nasi katok stall were also affected.

“Although there is a big drain in the area, it couldn’t accommodate the massive volume of rainwater that flowed within a short period of time,” he said.

A resident of RPN Kampong Mengkubau, Juryn residing at Simpang 63 said if the rainfall continued for another two to three hours, her area would have also been inundated.

“This is common in the area. We have reported to the authorities and awaiting for the matter to be addressed,” she told the Weekend Bulletin.

“Thirty minutes of continuous rain would cause a traffic jam in the area as the road gets flooded. But the freak storm on Thursday night was extraordinary. I’m thankful that my house and shop were not affected,” he said.

The Weekend Bulletin observed fallen tree branches that had obstructed Jalan Tanah Jambu at two locations while some cars were stranded along Jalan Muara.

The Brunei Darussalam Meteorological Department (BDMD) on Tuesday said that the Sultanate is expected to experience occasional heavy rain and thundershowers until tomorrow.

There is risk of flash floods at low-lying and flood prone areas especially when coinciding with high tide during heavy showers, said BDMD.

The department advised the public to take necessary precautions to ensure safety.