THE WASHINGTON POST – In his illuminating and accessible new book, James Oakes, an acclaimed historian of emancipation, offers us a “third Lincoln”: Neither the mythic Great Emancipator nor a flawed reluctant emancipator, but instead a committed proponent of antislavery constitutionalism.

Lincoln, Oakes argues in The Crooked Path to Abolition: Abraham Lincoln and the Antislavery Constitution, consistently upheld the “federal consensus” on slavery: that Congress could not abolish slavery in any state but also could not interfere with a state’s choice to emancipate enslaved people. Within these constitutional boundaries, Lincoln pursued, before and during the Civil War, the goal of abolition by individual states. He intended that pressure from the federal government would move the Southern states to enact their own gradual emancipation policies, as individual Northern states had done after the American Revolution.

Lincoln’s outlook was rooted in a distinct antislavery constitutionalism, elaborated by reformers and politicians in counterpoint to the proslavery constitutionalism of Southern enslavers. During the antebellum decades, as slavery’s apologists ratcheted up their claims that slaveholding was a constitutionally protected property right, abolitionists drew out the antislavery implications of the founding documents. For example, while Southern enslavers emphasised their summary right of re-caption of fugitives, abolitionists emphasised states’ authority to require due process in renditions. The Constitution’s ambiguity on the fugitive issue meant “that every slave who escaped from Maryland to Pennsylvania, or from Kentucky to Ohio, opened the possibility of a political conflict between the owner’s claim to his or her ‘property’ and the free state’s recognition of the accused fugitive’s right to due process”.

Invoking the Fifth Amendment right to due process was just one of the many ways that slavery’s opponents “colonised” the Constitution, imbuing certain clauses with anti-slavery meaning. They also emphasised such measures as the territorial clause, which granted Congress the power to ban slavery from the territories, thereby preventing the addition of new slave states. By the time he became president in 1861, Lincoln had embraced most elements of what Oakes calls the ‘Anti-Slavery Project’: a set of policies, such as congressional abolition of slavery in the District of Columbia and the suppression of illegal smuggling of enslaved people into the United States, designed to reverse slavery’s expansion and shift the sectional balance of power northward. 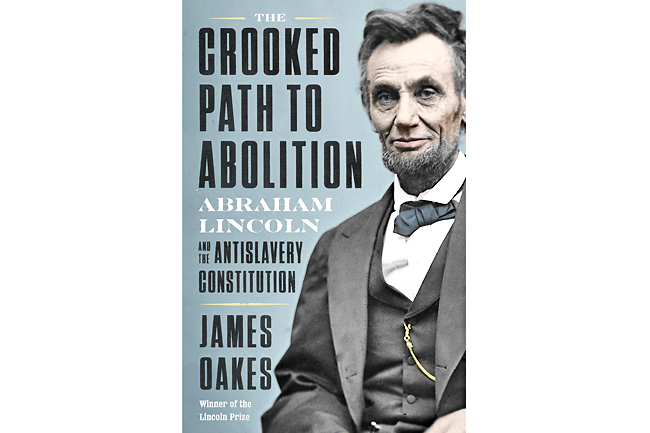 Lincoln homed in on the banning of slavery’s expansion in the territories as the one issue around which his nascent Republican Party was “most likely to build a winning coalition”. In his reckoning, the policy of non-extension, by surrounding slave states with a cordon of free states, would undermine slavery’s economic profitability and motivate Southern Whites to dismantle the institution.

The Civil War, Oakes shows, radicalised Lincoln, compelling him to press more aggressively an agenda of state-level emancipation, through both threats and incentives aimed at enslavers. Lincoln seized on the anti-slavery movement’s long-standing forfeiture-of-rights doctrine, which held that seceded states would relinquish their right to have fugitives returned, and on the doctrine that emancipating the enemy’s enslaved people was a legitimate use of war powers. These pre-war doctrines formed the basis of the wartime policy by which the Union Army confiscated, freed and eventually enlisted fugitive slaves.

Lincoln also tried in vain to entice the loyal border slave states to adopt gradual emancipation policies, by offering to compensate them for their financial losses and to deport those who were freed. Though his overtures were rebuffed, he remained committed, even after his Emancipation Proclamation of 1863, to promoting state-by-state abolition. Lincoln’s sustained campaign to shift the balance of power in these states toward anti-slavery forces worked, as six state governments – Maryland and Missouri, which had never seceded, and Virginia, Arkansas, Louisiana and Tennessee, which were undergoing wartime re-construction – abolished slavery in the last year of the war. Adding them to the roster of free states made possible the 1865 ratification of the 13th Amendment, which abolished slavery throughout the United States. This course of events was “hardly inevitable”, Oakes noted but “neither was it accidental”: Anti-slavery constitutionalism guided Lincoln’s journey down the winding path to emancipation.