THE WASHINGTON POST – Though wood still plays an important role in the construction of our homes – think two-by-four stud supports and plywood in walls, flooring and roofing – our eye most often falls on exteriors covered in synthetic materials like vinyl siding.

Some playgrounds that once featured lots of wood now have our kids screaming atop moulded plastic play sets. And thousands of readers will take in this review on a digital device, not on a sheet of paper made from dried wood pulp. In a world where wood is, if not absent, increasingly out of sight, British biologist Roland Ennos suggests we may not be paying enough attention to its importance.

He contends that wood is not merely useful but central to human history. “It is the one material,” Ennos wrote in The Age of Wood, “that has provided continuity in our long evolutionary and cultural story, from apes moving about the forest, through spear-throwing hunter-gatherers and axe-wielding farmers to roof-building carpenters and paper-reading scholars.”

As I write this review I sit in front of a (red oak) writing table. My (sugar maple) chair creaks rheumatically, resting on the (white oak) floor. Through the (pine) frame of the window, my gaze settles on a dogwood. I’m surrounded by wood. Lewis Mumford once called wood “the most various, the most shapeable, the most serviceable of all… material” that humans have used in their conquest of their environment. 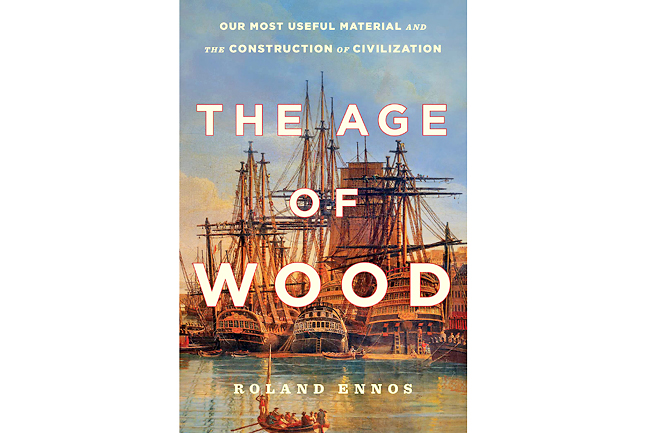 Wood’s countless varieties have diverse, useful properties. It grows naturally in sizes large enough for building construction. Yet it splits into slivers thin and strong enough to clean between our teeth. It carries loads as well as concrete and can outperform steel for supporting spans between pillars. Wood can be turned, planed, finely carved, bent and woven. It burns as well, competing against fossil fuels for home heat. It transmutes into charcoal when burned in the absence of oxygen and is a fuel still used by millions around the world for cooking and feeding the fires of some iron smelters.

Ennos, a professor at the Unversity of Hull in England and a specialist in the mechanical properties of trees, shares his insatiable curiosity with us. He applies his sharp eye for details, and he does so entertainingly. (Who knew that Achilles, the hero of the Trojan War, flipped over his chariot at night to lighten the weight on the wheels to prevent them from losing their round shape?) Ennos draws from his own research, such as experiments testing how the ridges on our fingertips affect gripping strength. He suggests that those ridges helped our arboreal ancestors safely swing without claws from rain-slicked tree branches. Serendipitously, this adaptation for treetop travel may have bequeathed us our advantageous dexterity. He also draws on an erudite knowledge of history, anthropology, animal behaviour and cognitive science.

Ennos contends that scholars have underappreciated the influence of wood on the evolution of humans and the trajectory of civilisation. Wood rots – unlike metal and stone – making its contributions less visible.

Our arboreal primate ancestors adapted to life in the treetops over millions of years, endowing them with attributes that benefitted us after we descended and went terrestrial. Ennos argues that our forward-facing eyes with binocular vision, upright posture and differentiation between hind limbs for locomotion and forelimbs for gripping all evolved for living in canopies.

The human propensity for fashioning tools – though not quite unique – may also have been an adaptation to canopy life. Orangutans weave slings out of twigs, probably so they can sleep without fear of falling. They also extract honey and pry open nuts with stick tools they make, a skill that might have evolved from nest building. Ennos gently chides primatologists, his sometimes-collaborators, for hesitancy to embrace this provocative connection between nest-making and human evolution.

In his final chapters Ennos looks at our current conflicted relationship with forests. He says woodlands now blanket only 31 per cent of Earth’s land, down from 43 per cent 6,000 years ago. And deforestation continues apace. Each year, according to the United Nations Food and Agriculture Organization, the world loses about 18,000 square miles of forest (about the combined areas of New Hampshire and Vermont). Much of the deforestation is in the Congo and Amazon rainforests. It bears repeating that the value of these jungles goes far beyond the board feet of lumber they contain. They are Earth’s largest repositories of biodiversity, harbouring countless species found nowhere else. And sturdy tree trunks in the tropical jungle store huge amounts of carbon. When the forest is cut and replaced with crops, more carbon dioxide accumulates in the atmosphere, accelerating climate change.

Ennos offers ideas for slowing deforestation and making more use of wood’s superior properties to combat climate change. For instance, new laminating techniques make stronger beams in shapes and sizes never possible before. And they can be constructed from small pieces that might otherwise be wasted. In 2019, Norway built the world’s tallest building made of wood, an 18-storey low-rise, using these light laminate beams. It weighs only one-fifth of an equivalent building of steel and concrete and required only half as much energy in its construction. “Even taller wooden buildings are being planned, from a 21-storey block in Amsterdam, a 40-storey tower in Stockholm, and even an 80-storey tower in the Barbican, London,” Ennos wrote.

Ennos acknowledges that such high-tech solutions alone won’t rescue us from the climate crisis. To slow global warming, he advises embracing forests and their wood more than ever in modern history. He contends that we’ve become entranced by our possessions that devour resources and energy, and that we’ve lost touch with natural places and simple products that give us joy. For all our creature comforts, we’re “living more impoverished lives than those of our ancestors”.