Women are more burnt out than men

CNA – Shilpa Jain was working as a corporate lawyer for a firm in Melbourne several years ago when an email arrived in her inbox – an invitation to an office party.

The sight of yet another email – even one that was seemingly harmless – set off something in her and she started weeping uncontrollably.

Before that fateful email, Jain had been working late for months at a time, typically turning off her computer only at around midnight.

She was exhausted. More specifically, she was burnt out.

At the time, she didn’t know or understand what she was going through.

Burnout is described in medical literature as a state of physical and emotional exhaustion resulting from long-term chronic stress.

Women are more susceptible to burnout, according to research. Specifically, working mothers display more symptoms of the condition than working fathers. 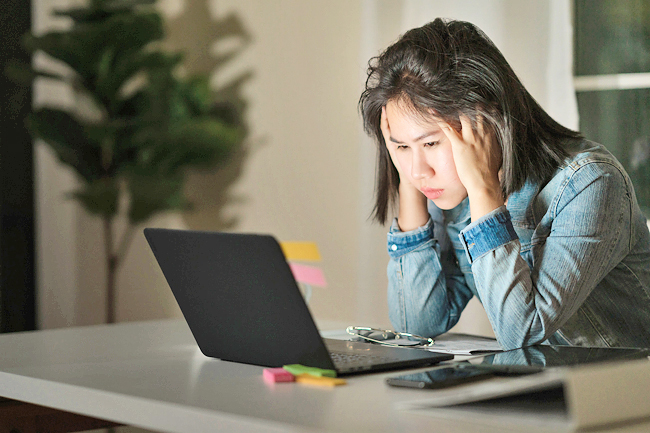 As part of its work to investigate ways of increasing life expectancy and quality of life, global consulting firm McKinsey and Company launched the McKinsey Health Institute (MHI) earlier this year.

One of its first surveys, conducted on nearly 15,000 professionals and human resource decision makers, found that women showed more signs of depression than their male counterparts.

Women in Asia were also more susceptible to burnout than in other parts of the world, the survey found.

Many other initiatives, triggered by the harsh effects of COVID-19, have had similar results.

Such findings have helped women like Jain identify and understand what they are going through. They have also encouraged some to seek professional help.

In 2019, Jain moved back to Singapore and eventually started Talk Your Heart Out, an online counselling service aimed to make mental health services like counselling and therapy more accessible.

“The common symptoms are a sense of helplessness, detachment and failure. A lot of people also feel quite depressed when they are experiencing burnout.

“And these feelings will manifest in other areas of life (not just work). It may affect your relationships because you’re taking it out on other people. You may start withdrawing socially  nd physically. You stop prioritising your exercise or eating healthy. You begin developing frequent headaches or muscle pains,” said Jain.

As more women speak on and find help for their burnout, the variables that make them more susceptible to the condition have begun to surface.

A lot of them are rooted in imbalances in society that pose unfair demands on women.

For example, with more women entering domains traditionally dominated by men, there is a tendency to believe that they need to do more to receive the same amount of recognition as the opposite sex, Jain suggested.

“To make a mark and to prove themselves, women often feel the pressure to outperform their male colleagues to be taken seriously.

“How often have women been asked how they balance work and kids? This question is never addressed to men,” said the 34-year-old.

The burden of caregiving also continues to predominantly fall on women – even if these women have full-time jobs, Jain pointed out.

“It makes it difficult to switch off. They feel like they’re just going and going and going, and that they have no choice but to keep on going,” she said.

In fact, even in the office, tasks of a caregiving nature are often assigned to women.

“Women may find that they disproportionately take on emotional labour or ‘invisible work’.

For example, they’re the ones who are setting up the meeting room, organising a colleague’s birthday party or booking the restaurant for a team-bonding session.

“They end up doing this because these are the sorts of responsibilities that fall on our gender.

The things you do at home, you end up doing in the office as well. Eventually, this unpaid invisible work is going to take a toll,” said Jain.

Typically, women are less assertive than the opposite sex so they are frequently unable to just say “no, I don’t want to take on this additional work”, she added.

In the years since the pandemic, many experts have come forth with books addressing burnout in women. Popular titles include Burnout: Solve Your Stress Cycle by Emily Nagoski and The Gifted by Daphne Michaels.

In the latter, United States (US) human potential expert Michaels noted that being overwhelmed means your life or work is overpowering you. To regain control, you need to clarify your intentions, set realistic expectations and focus on the next step.

CNA Women editor Penelope Chan surfaced these lessons in our Womankind episode, inviting the group to reflect on what we have done in this vein to help us overcome burnout.

Doing a values exercise – on the encouragement of my own therapist – has moved the needle the most in terms of my personal recovery.

A values exercise is simply one in which you choose, typically from a list, the values that matter most to you. Which of these values – such as kindness, generosity, honesty and humility – do you identify with best? You then reflect on how you have applied these values to your life.

For those with burnout – there is often a disconnect between our values and our lifestyles. I realised there was a lot I was doing and putting up with that didn’t align with my personal beliefs.

It was a hard pill to swallow and one that unfortunately, made the burnout worse for a while.

“I cannot overstate the importance of doing some deep work,” said Jain after I confided in her.

“Kudos to you for having done that. It takes a lot of deep digging to understand who you are, what motivates you and what you want out of life.

“But there is no denying that this work takes a lot of time and effort, and you need to have support for it. When someone is experiencing burnout, they might not always have the capacity to start there,” she added.

Jain recommends that instead of immediately throwing yourself into the deep end of “inner work”, first attempt to simply create more “headspace” by applying small changes.

“When you have more room in your life and in your mind, then you can think through the bigger things. With my therapist, the first thing I did was to step back and start with the basics.

“I asked questions like: Am I sleeping enough? Am I eating right? Am I exercising sufficiently? Am I neglecting my friends and family? Am I connecting with people enough?

“After addressing these, I felt a bit better. It was only after this that we talked about other things to address my work burnout, which eventually led to my quitting my job,” said Jain.

Ultimately, a major element of burnout recovery is self-compassion, said the entrepreneur.

“Maybe you live in your email inbox, so you might want to try not checking your email after 10pm. That’s progress.

“But I do agree that deep work is 100 per cent required, eventually. Otherwise, you will forever be susceptible to burnout.

“You will get out of one episode only to enter another one soon after because you’re not addressing the core issues.”