THE WASHINGTON POST – Here’s a sobering fact: Scientists estimate more than 99 per cent of all living species that have ever existed have been eradicated from Earth. That’s at least five billion (5,000,000,000!) species. Beyond this cold, seemingly abstract statistic, however, are countless stories of loss – forested habitats and ocean depths, once teeming with activity, turned barren and eerily devoid of life.

I imagine such scenes as ones of immense turbulence and despair, followed by unsettling, quiet emptiness. Endling: Extinction is Forever hones in on that mental image, portraying these moments with startling intimacy through the eyes of a small family: that of a mother fox and her four puppies.

The game’s opening quickly sets the tone of its tale with a painful scene of destruction: a catastrophic wildfire sets acres of land ablaze at a terrifying pace, while frantic forest animals scurry away. As a soon-to-be mother fox, you’ll need to seek shelter from the flames by navigating through the destruction.

You can steer left and right across a scorched landscape, peek at firefighters working to suppress the blaze, burrow under fallen logs, climb up charred trees and man-made structures, and leap over gaps in collapsed bridges.

Eventually, you’ll find refuge within a small cave, crumpling to the ground from a mix of exhaustion and relief. Giving birth to a litter of four adorable pups – each with their own unique swath of colouration and coat patches – a deep maternal instinct stirs within you.

You’re presented with something so unbearably precious to protect; you have to keep them alive at all costs. 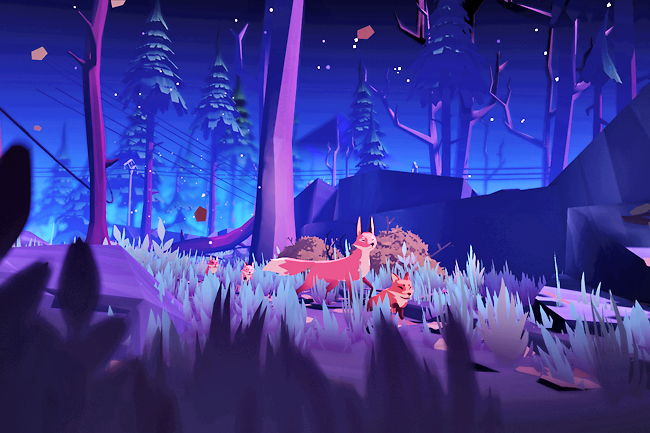 But doing so can be an extremely strenuous exercise, at least in the beginning. Endling is a survival game, and a big part of the experience is scavenging for food to feed your pups before returning to the safety of your lair. To complete the game, you’ll need to survive while keeping your babies well-fed for a certain number of days until the finale unfolds.

One way to find food is to hunt for small prey – mice, fish and rabbits – but wildlife is extremely scarce. You’ll have more luck foraging for berries or rummaging through carelessly discarded trash bags for some scraps, though these aren’t particularly nourishing.

At the same time, there’s very little resource management involved; you can only live day by day. When you manage to sink your teeth into any morsel, be it a fresh hunt or scraps from the trash pile, you can only carry what you’re able to fit in your jaw until you return home to feed your pups.

That means you won’t be able to stash away hoards of food for use later. In a way, survival in Endling is simple – you just need to find enough food for your puppies to last the night.

But the consequence of not being able to keep them fed is just as straightforward: They will not survive the night. That is a grim reality I found particularly difficult to come to terms with. In my first playthrough, I lost one of my puppies to starvation. It took an enormous amount of willpower not to reset the entire run and start over from scratch.

Moreover, while many survival games employ roguelike elements, it’s crucial to point out that Endling isn’t one of them. As a fox, you won’t “level up” with every pup lost, or gain new abilities to better protect them. This isn’t a traditional video game, in which you become stronger, faster and more powerful as you progress. Endling trades that fantasy for realism.

That’s a bitter point that Endling reinforces not just through its title – it’s called “Extinction Is Forever” for a reason – but also in the multitude of dangers your family will encounter.

Predators like owls will swoop down to whisk your puppies away. Greedy poachers will want to lay their grubby hands on them.

Then there are steel leg-hold traps, which are hidden in plain sight to ensnare you when you’re momentarily distracted by other threats. Fall into these traps too many times, and you’ll inevitably bleed to death. All these obstacles arise as you chase down one of your pups, who was snatched up by a hunter early in the game. You’ll need to discover its whereabouts by following its scent across the map.

If there’s anything incongruent about the tale’s dismal tone, it’s that the injuries sustained by the fox are mostly temporary – so long as you don’t get injured too frequently. Even the fox’s death will simply result in a do-over from the beginning of the day (though the loss of your pups is still irreversible).

As a result, death can sometimes become a way to get out of a sticky situation, such as when you’ve wandered too far from your lair, toward dangers too tedious to overcome. It’s one aspect of the game that could have benefited from a more traditional roguelike structure, in which you’re forced to start a new run when the fox meets her demise.

And yet, Endling’s overarching sense of doom is abated by small but genuine moments of joy and compassion. You can watch your pups experience winter for the first time, delighted by the blanket of snow around them. You can look on with pride as your pups grow from their harrowing experiences, as they learn to traverse high walls, leap over holes in the terrain and squeeze into small spaces to scour for more food.

And located at parts of the map is a young refugee named Molly, who offers your pups some food and respite from the harsh realities of surviving in Endling. When everything seems so unbearably hellish, seeing a friendly, outstretched hand is a welcome reprieve.

Things start to get a little better. You can tell, intuitively, where and how to find more food.

Your pups are a little more well fed. You learn to avoid danger by crouching a little lower, by softening your footsteps so that predators and humans can’t hear you.

But Endling never forgets the horrors of habitat destruction and the unpredictable, destructive nature of climate change. Despite the game’s cel-shaded splendor, the bleak and dispiriting atmosphere can inspire feelings verging on emotional fatigue.

You’ll meander through scenes of empty forests and metallic factories, with rampant logging, invasive deforestation efforts and dismal sights of faceless workers tinkering away at machines looming in the background. Any human who catches sight of you either wants you gone or dead.

Endling isn’t the sort of game you might settle down to play after a long day of doomscrolling through social media; it’s the sort that forces you to confront the monstrous scale and toll of human activity on the ecosystem and the planet. And yet, even as a deeply apocalyptic look at what feels like the imminent end of our world, the game’s profound pessimism doesn’t stray too far from the truth.

Scientists have already warned that we are in danger of losing 20% to 50% of all species by the end of this century; the bulk of this is due to human activity.

In the end, these forces are beyond the understanding of a small family of foxes who are trying to survive their evolving, hostile environment. Their hardships remind us that we aren’t that far from a traumatic future where fragile ecosystems will continue to break down, and the rising sea level will devour entire continents.

What will happen to our home – and to the billions of animals – if we continue to stick to a regime that callously pollutes and depletes our natural resources, heating up the planet till it becomes an unlivable husk?

For a chance to survive, these creatures will move on and abandon everything in search of a more habitable home.

They may not find one. And they are not likely to survive these long, arduous nights.