‘Without people, that’s it’

NEW YORK (AP) – As kids returned to school last month, people watching New York City pull itself out of COVID-19’s shadow wondered whether workers who fled Manhattan’s office towers during the pandemic would finally return in a rush, too.

More workers did return to their offices, at least part-time, as the summer ended, limited data suggests. But the onset of autumn has also made it clearer than ever that the recovery will be drawn out, and that some aspects of the city’s economic ecosystem could be changed for good.

“We’ve certainly entered a changed relationship between office workers and their offices,” said, the director of Economic and Fiscal Policies at the Center for New York City Affairs, James Parrott at The New School.

That meant hardship for New Yorkers who are part of the economy built around the commuting class.

They are the workers whose livelihoods can’t happen over an Internet connection, who have depended on that serendipity of a customer being in the right place at the right time – the impulse to buy a snack, pop into a store, throw some dollars into a street performer’s
tip bucket. 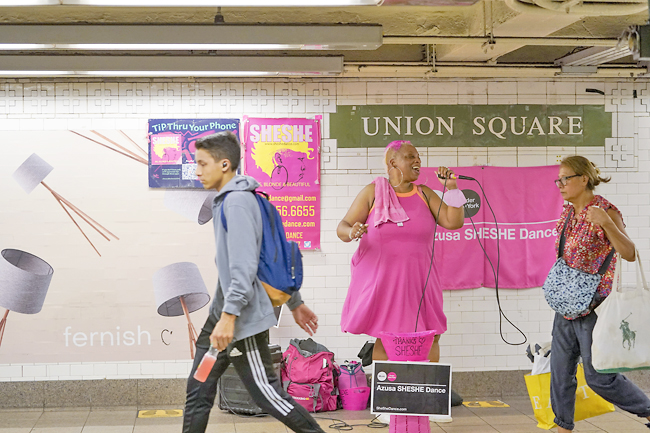 They’re people like Emad Ahmed, 58, who for more than two decades has worked in lower Manhattan, running his food cart on a plaza near Wall Street and the World Trade Center.

The pandemic forced a pause, but as soon as he was able, Ahmed came back – and wishes he could say the same for all the workers he relied on as customers, many of them still working at home and coming into Manhattan only a few days a week, at most.

“The pandemic (is) almost done, nobody uses a mask now, and you can go to the subway and the bus without masks, and people still don’t come,” he said. It’s “absolutely not like before”.

Some had looked to Labor Day as a possible catalyst, a transition back to the way things were, and indeed, some data has shown momentum since then, including office occupancy in the metro area getting closer to the halfway mark.

Subway ridership is on an upswing, as well, with one day last week reaching almost 3.9 million riders. While that’s only about 64 per cent of a comparable day pre-pandemic, the weekday totals have been inching up overall since the holiday.

A survey of Manhattan companies put out by the Partnership for New York City last month found that on an average day, just under half of Manhattan office workers were in their offices as of the beginning of September.

Looking ahead through the rest of the year to the beginning of 2023, the survey didn’t show those numbers changing drastically, despite city government and corporate leaders urging workers to come back.

“People have gotten used to the flexibility and the benefits of not having to commute to the office every day,” said president and CEO of the partnership, Kathryn Wilde. “They’re going to have to have good reasons to go back”.

Remote work has brought an upswing in jobs and liveliness to some neighbourhoods in the outer boroughs, as people staying close to home have brought their coffee and other daily needs to their local outlets.

But that hasn’t made up for what’s been lost, said the executive director of the Center for an Urban Future, a public policy think tank, Jonathan Bowles.

“In some ways, it’s almost miraculous how much the city’s economy has recovered since the depths of March 2020,” Bowles said.

“But there are still really large pockets, particularly around the central business districts where entrepreneurs and small businesses are struggling left and right… seeing a fraction of their previous customers,” Bowles said.

Ahmed is among them. On his best days, midweek, he sees maybe 60 per cent of what he would have before the pandemic. On the worst, even getting to 10-15 per cent can be a challenge.

For some dependent on office life, the partial return has been enough. Executive vice president of 32BJ Service Employees International Union, Denis Johnston said almost all of the commercial office space cleaners represented by the union are back at work.

Whether companies have some or all of their employees back on a given day, the spaces need to be cleaned and maintained, so his members are needed, he said.

Some, like taxi driver Sukhdarshan Singh, have learnt to adjust. While there are fewer commuters, he’s finding fares at other times.

“Office people are not back, but evenings and weekends, people are out,” said Singh, a cabbie for about 35 years.

But other sectors are suffering. Among retail outlets, food and beverage stores have seen only about 66 per cent of jobs come back, while clothing stores have seen about 62 per cent, according to the New York City Independent Budget Office.

If office workers are “not in the city, they’re not shopping in the city”, said president of the Retail, Wholesale and Department Store Union, Stuart Appelbaum.

“Stores are operating with fewer people because there are fewer customers,” he said.

The city’s unemployment rate was 6.6 per cent in August, significantly higher than the national rate of 3.7 per cent.

Office workers being slow to go back is “absolutely going to impact the bottom line for tonnes of… vendors, people that operate food trucks and so many more businesses that are dependent on office workers providing a big chunk of their sales”, Bowles said.

“There are just going to be fewer of those chance encounters, where people pick up something to eat or drink or to bring home during their lunch hour, on their way to work and on the way home,” Bowles said. “And that’s a surprisingly huge part of the Manhattan economy.”

Ahmed worries about his future, especially as winter approaches. Even before the pandemic, the cold weather was slow for business, and now he worries it will be a financial deep freeze.

He just holds out hope that the city streets will come back to the life they had before.

“Nothing else can help me,” he said. ”Without people? That’s it.”