BUENOS AIRES (AFP) – Argentine President Alberto Fernandez is looking for a political solution to the country’s economic crisis with his appointment of a long-term politician as a new “super minister”, analysts said.

The South American country has suffered years of economic crisis, with some 37 per cent of its population now living in poverty.

Inflation for the first half of this year alone topped 36 per cent, and is predicted to reach 80 per cent by the year’s end.

With that crisis-backdrop, Fernandez on Thursday named Sergio Massa, the current head of Congress’ Lower House, as a new super minister to oversee the economy, development and agriculture ministries as well as relations with international organisations.

Massa, a lawyer by trade who has spent years in politics, replaces economist Silvina Batakis, who had been on the job less than a month. 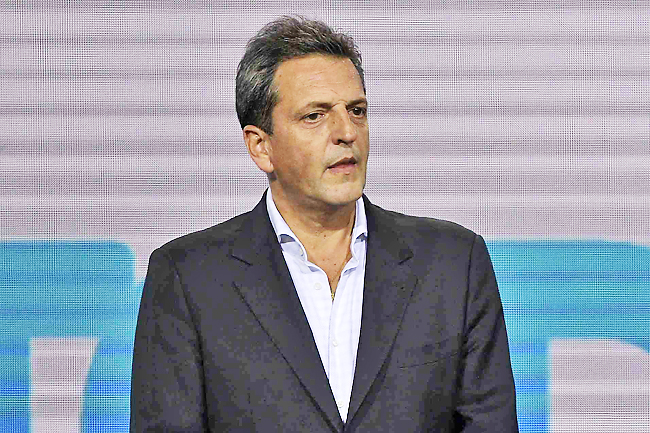 “Massa is not an economist but a politician. But the point is that Argentina’s crisis is political, it needs a person with broad shoulders and political skill,” analyst Carlos Fara told AFP.

One of Argentina’s major problems is the ongoing power struggle inside the ruling Frente de Todos political coalition between Fernandez and Vice President Cristina Kirchner, herself a former president.

Guzman, who was in charge of renegotiating Argentina’s USD44 billion debt to the International Monetary Fund (IMF), was a close ally of Fernandez.

However, “Massa brings sufficient consensus in the leadership of the ruling Frente de Todos coalition and may be able to make decisions that are not popular”, said Fara.

‘PRAGMANTIC’ APPOINTMENT
The markets did not falter on Friday, one day after the appointment.

“The markets’ reaction was positive because they see in Massa a pragmatic figure who has good relations with business leaders and the markets,” GMA Capital consultancy economist Nery Persichini told AFP.

Massa will assume his new position on Tuesday after the Chamber of Deputies has appointed his successor. He will then announce his first measures the following day.

“It is very important that a politician is in charge of the economy. Putting technical people in charge did not work. This will generate peace in the markets, it’s a pragmatic move,” director of the Hacer economic consultancy Pablo Tigani told AFP.

As part of Argentina’s negotiations with the IMF, it has committed to reducing its public deficit from three per cent in 2021 to 0.9 per cent by 2024.

One of Massa’s toughest challenges will be to increase Argentina’s available international reserves, which analysts say are at critical levels, as well as reducing the fiscal deficit.

“Argentina’s problems cannot be solved by one person, they will be resolved by teamwork.”

“The markets are asking themselves whether the new super minister has the backing of Vice President Cristina Kirchner to implement an adjustment and correct relative price imbalances.”

Fiscal discipline has so far not protected the poorest Argentines from the ravages of galloping inflation that is chipping away at their meager earnings.

On Thursday, thousands of people demonstrated in Buenos Aires demanding a “universal salary”.

Protesters want a minimum living wage worth ARS67,000 (around USD490 at the official exchange rate), which amounts to the cost of two basic food baskets, for the country’s lowest earners.

“It is as if the government has no direction, that it’s drowning. I’m very worried about the lack of work, about the incredible inflation,” Nestor, an unemployed 54-year-old, told AFP.