Guest of honour UTB Vice-Chancellor Professor Dr Hajah Zohrah binti Haji Sulaiman and Ambassador of the Islamic Republic of Iran to Brunei Darussalam Homeira Rigi Zirouki handed over the prizes to the winners. Organised by the Embassy of Islamic Republic of Iran in Brunei Darussalam, the event supported by UTB, was held at the Lecture Theatre 2, Library Complex, UTB.

The ambassador spoke on the reasons for choosing Professor Maryam Mirzakhani for the event.

She said senior scientific management and community should scientifically nurture and support young women in its rooted patterns and give them opportunities. 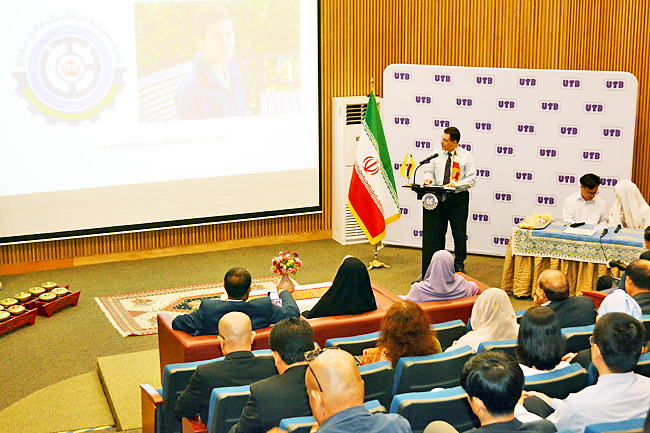 “Women representing half of the world’s population should know that the burden of responsibility for scientific leap, culture and science production is on them,” the ambassador said.

She added, “I would like to draw the attention of the authorities and the society to the empowerment of girls and women, and remind them that the empowerment of women means the stabilisation of new cultural and Islamic opportunities. Professor Maryam Mirzakhani had three special elements – her existential personality, Iranian and Islamic intelligence. This example is a great symbol for paying attention to the capabilities and intelligence of Muslim girls of the world.”

Vice President of the Islamic Republic of Iran for Women and Family Affairs Masoumeh Ebtekar sent a message to mark the event.

The ceremony was held to motivate UTB students to learn mathematical methods and apply them not only in their field of study, but also to various branches of science and technology. This competition further aimed to develop students’ mathematical modelling skills.