Why you need eight cups of water a day

THE WASHINGTON POST – We’ve all heard the age-old advice to drink eight cups of water a day. But if you fall short, don’t worry: That advice is probably wrong anyway.

That’s according to new research, published in the journal Science, which found that for most healthy adults, drinking eight cups of water a day is completely unnecessary. The advice is misguided in part because it doesn’t take into account all the water that we get from our food and from other beverages like coffee and tea. The research found that our water needs vary from one person to next and depend on factors like your age, sex, size, physical activity levels and the climate that you live in.

The authors of the study said that for healthy adults, there is no real benefit to drinking eight cups of water a day. Nor is it dangerous: Your body will just excrete the extra water you consume in your urine.

“If you drink eight cups of water a day, you’ll be fine – you’re just going to be spending a lot more time in the bathroom,” said Professor of Evolutionary Anthropology and Global Health at Duke University and a co-author of the study Herman Pontzer.

The advice to drink eight cups of water a day stems from a 1945 recommendation from the Food and Nutrition Board of the National Research Council, which encouraged adults to consume about 64 ounces of water daily. The recommendation referred to a person’s total daily intake of water, including from all their foods and beverages, but it was widely misinterpreted to mean that people should drink eight eight-ounce glasses of water every day. 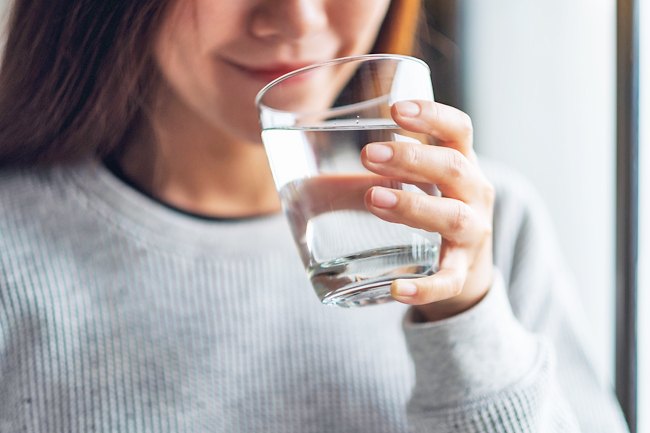 Some experts have argued that the widely held belief was not rooted in science. One study of 883 elderly adults for example found that there was no evidence of dehydration among the 227 people in the study who routinely drank less than six glasses of water daily.

“Until we have more evidence-based documentation that fluid intake of eight glasses per day improves some aspect of an elderly person’s health,” the researchers concluded, “encouraging a fluid intake above a level that is comfortable for the individual seems to serve little useful purpose”.

Nevertheless, the advice is so widely ingrained that many companies use it to market products. You can buy 64-ounce water bottles designed to motivate you to drink the equivalent of eight cups of water daily, and water-bottle sensors that will track your water intake and remind you to “hydrate” every 30 to 40 minutes.

“We have guidelines telling people how much water to drink,” said Pontzer, who wrote a book on metabolism called Burn. “But the reality is that people have been kind of making it up.”

To see how much water people really need, Pontzer and his co-authors analysed data on 5,600 people in 26 countries who ranged in age from eight days old to 96 years old. The participants included people from all walks of life, like farmworkers, athletes and non-athletes, sedentary office workers in Europe and the United States (US), and people from farming and hunter-gatherer societies in South American and Africa.

The participants were tracked with a gold-standard technique called “doubly labelled water”, which uses water laced with tracers that can be used to track the body’s production of carbon dioxide, allowing the researchers to get precise measurements of the participants’ daily energy expenditure. It also allowed them to estimate the amount of water the participants generated from metabolism and the water that they consumed.

“It’s really accurate at measuring how many calories you burn each day but also how much water you take in and how much goes out,” Pontzer said.

Using this method, the researchers determined how much water the participants lost and replaced each day, a measurement known as water turnover. They found that a person’s daily water turnover was largely determined by their size and their level of body fat, which contains less water than muscle and other organs.

The more “fat-free” mass a person has, the more water they need. Since men tend to have larger bodies and less body fat compared to women, they generally use more water. “Men use more water every day because we have a bigger system to keep hydrated,” Pontzer said.

The research showed that how much water you need changes over your lifetime. In general, our water needs peak between the ages of 20 and 50 and then decline in parallel with the slowing down of our metabolisms. That’s because the amount of water you need is partly dependent on your metabolism and how many calories you burn.

“All of the work that your cells do every day is water-based,” Pontzer said. “The ratio of the amount of water that you use to the number of calories that you burn stays fairly consistent over your life span.”

Two other important factors that determine your water needs: Your climate and whether you lead a sedentary lifestyle. People who live in hotter climates and engage in more physical activity have higher levels of water turnover.

The study found that people from less developed regions of the world have higher levels of water turnover than people from developed countries. “We think that’s because if you’re in a poorer country, you’re likely to be working outside every day, and you have less access to climate control,” Pontzer said. “People in poorer countries are also often doing jobs that require more physical activity.”

He noted that as the world gets hotter, it is going to cause our water needs to increase, which will worsen problems for the two billion people across the globe who currently have limited or inadequate access to clean water.

Asher Y Rosinger, an expert who was not involved in the study, said the research was “incredibly impressive” and the findings “make a lot of sense”. He said that for the most part, people tend to consume the amount of water that their bodies need.

But he cautioned that water turnover is not necessarily a precise measure of how hydrated a person is. “In those hot environments, people are using more water, but we don’t necessarily know whether it’s sufficient to meet their water needs,” said Director of the Water, Health and Nutrition Lab at Penn State Rosinger.

So how much water should you drink? The answer is simple: Drink when you’re thirsty.

Prioritise water, and try to avoid sugary drinks, which can cause metabolic problems. Coffee and tea are fine as well.

While the caffeine they contain can increase urination, they will still be hydrating so long as you consume less than 400 milligrammes of caffeine, Rosinger said. Keep in mind that you get water from your food as well. Some water-rich foods are fruits, vegetables, beans, yogurt, brown rice, and soups.

“If you’re paying attention to your body and drinking when you feel like you need to, then you should be fine,” Pontzer said.