THE WASHINGTON POST – On the subject of fashion, men have been quite the sly ones over the years. They’ve used fashion to enhance their authority and elevate their stature, all while communicating a message of elegant refusal.

Generations of men would have the culture believe that they’re far too pre-occupied with business, government, technology and other so-called serious pursuits to involve themselves with the flourishes of fashion. In their repetitive dress code of tailored suits, khaki trousers and golf shirts, they send the message that they’ve renounced superficiality and frivolousness as beneath their gender’s dignity.

Fashion, and all of its precious silliness, is left to the ladies. And this masculine dress code has served men well.

Centuries have gone into the making of these rules and assumptions – and a bit of sleight of hand, as well. Men were not always inclined toward minimalism. For a good portion of human history, they were flamboyant in their dress, prone to peacocking their social rank, financial success and sexual prowess from 100 paces.

They wore bold colours and luxurious silhouettes and shimmering fabrics. But then, in the late 18th Century, over the course of about three decades, “men throughout Europe abandoned the styles that had signified wealth and power for centuries”, writes Richard Thompson Ford in Dress Codes: How the Laws of Fashion Made History.

“In their place, elite men adopted the sober, self-abnegating garb anticipated by Thomas More in Utopia and first favoured by religious Puritans: simple wool and linen in sober hues of dark blue, brown, grey, and black.” This was later described as the ‘Great Masculine Renunciation’, and it’s a constant theme in Ford’s thoughtful history of the rules and rituals of attire. 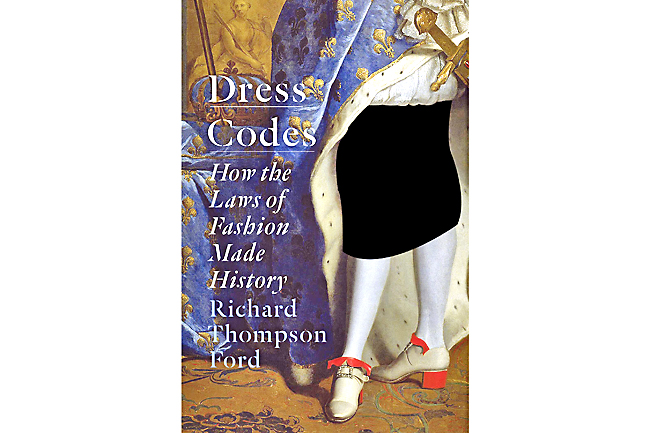 Ford isn’t a fashion historian but rather a professor at Stanford Law School. As such, he doesn’t wallow in the minutiae of Savile Row tailoring or wander into the weeds of Seventh Avenue personalities. Instead, he has a lawyer’s eye for the ways in which legislation and common law have helped shape attitudes about fashion, along with a fan’s sustained curiosity about fashion’s visual language.

Ford’s most memorable brush with sartorial fame, he writes, was when he entered Esquire’s 2009 competition for the magazine’s Best Dressed Real Man. Ford didn’t win – he didn’t even make the cut for the free trip to New York – but the experience forced him to consider how he dressed and why.

We choose our clothes for a host of reasons: comfort, appropriateness, self-expression, tradition. Our wardrobe is also filled with coded messages about power, wealth and status. Ford explores the ways in which our laws and traditions have dictated dress – and how those rules serve to maintain order. There was a time when only women of questionable morals wore earrings. Black men and women were kept at the bottom of the social hierarchy by codes that dictated the degree to which they could indulge in finery – and woe to those who were perceived to be dressing above their station.

But fashion is perhaps at its most powerful when shaping our understanding, and misunderstanding, of gender. Legal battles have been fought over standards of attire that did not treat men and women equally. Women have lamented the “pink tax”, which reflects all the ways they are forced to pay a premium because of their gender, including the cost of their clothing and the upkeep of it. And fashion and gender are at the heart of a combustible conversation about individual identity and the room that this country makes for the full expression of it.

Historically, men and women could be punished for wearing clothes that didn’t adhere to the gender rules of the day. Ford quotes a local ordinance, passed in 1848 in Columbus, Ohio, that spelled things out. “No person shall appear upon any public street or other public place in a state of nudity or in a dress not belonging to his or her sex.”

San Francisco passed a similar decree in 1863: “If any person shall appear in a public place in a state of nudity, or in a dress not belonging to his or her sex, he should be guilty of a misdemeanour, and on conviction, shall… pay a fine not exceeding five hundred dollars.”

To step outside of one’s gender designation was to take aim at the power structure – something that continued well into the 20th Century when designers such as Gabrielle ‘Coco’ Chanel and Yves Saint Laurent created trousers for women, and those garments were deemed unfit attire in venues from upper-crust Manhattan restaurants to the floor of the United States Senate.

In assessing dress, Ford notes that there really isn’t anything particularly feminine or masculine about clothing. Trousers and dresses can be tailored to fit any body – anatomy is beside the point. Ruffles and feathers and sequins are not inherently feminine. And pinstripes and herringbone are not masculine. That they have these gendered attachments is simply a matter of power.