Why Indonesia’s inflation rate has jumped to seven-year high

The July figure is the country’s highest inflation rate since October 2015. Back then, it was 6.25 per cent.

This comes amid soaring food and energy prices globally as well as crop failures domestically, according to head of the Indonesian statistics agency Margo Yuwono.

“Global commodity prices, as well as some situations that occured domestically such as rainfall and several government policies related to energy policy, have affected our inflation in July 2022,” said Yuwono on August 1 when he announced the latest inflation rate.

He pointed out that the major contributors to rising inflation include hikes in the prices of chillies and shallots as a result of crop failures amid recent heavy rainfall.

Higher airfares and cost of household fuel were also among the factors leading to higher inflation, said Yuwono.

On the ground, people have been feeling the pinch. Many food vendors are left with little option but to raise their prices.

Some have also opted to use less sambal for the time being, as chillies and shallots, which are key ingredients of the sauce, are more expensive now. 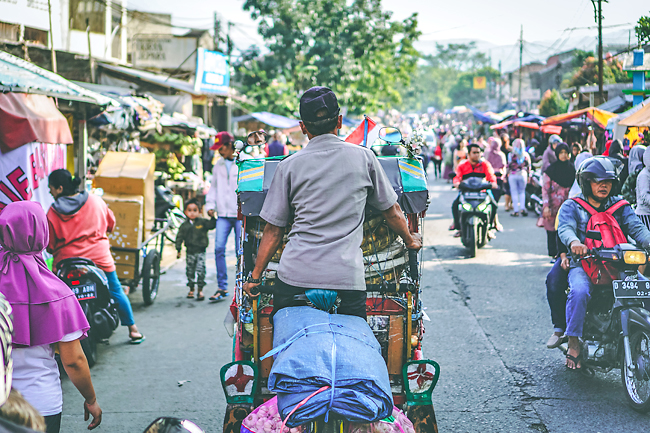 In May, it increased slightly to 3.55 per cent before climbing to 4.35 per cent in June.

The June and July figures are above the central bank’s inflation rate target of between two per cent and four per cent.

Analysts interviewed by CNA said the current inflation rate is brought about by an accumulation of several factors in the past few months.

Looking ahead, they expect the inflation rate to continue edging upwards.

Executive director of think tank Center of Reform on Economics (CORE) Indonesia Mohammad Faisal told CNA that the higher inflation rate was triggered by an overall low supply of commodities amid high demand.

He explained that the supply chains of various commodities have been disrupted due to the global situation. Domestically, there were disruptions in production such as crop failures in chillies and shallots which are seasonal.

At the same time, there is high overall demand since COVID-19 restrictions have been eased this year, resulting in higher mobility.

“If the mobility (of the people) is high, the demand for various goods and services will also be high.

“In the end, this will also increase the prices of goods,” said Faisal.

“We see that people’s mobility is starting to improve, credit growth is also starting to increase. As a result, core inflation is actually rising.”

Indonesia’s core inflation rate, which excludes volatile and seasonal prices such as food, was last month at 2.86 per cent year-on-year. It was 2.63 per cent in June.

Overall, Faisal of CORE Indonesia believes that supply problems are stronger contributing factors than the high demand. This is especially true when one examines imported inflation.

Imported inflation can also be triggered by exchange rate depreciation.

This has been a problem since the end of last year, said Faisal, citing the example of how increases in the prices of cooking oil domestically were triggered by higher palm oil prices globally.

“Supply problems have been happening since the end of last year like problems with cooking oil, wheat and non-subsidised fuel,” said Faisal.

“These are all factors which did not exist in the past seven years. That’s why the inflation rate is high now,” he added.

Jakarta-based economist Bhima Yudhistira said that with higher prices of imported products, local manufacturers have no choice but to increase their prices as well.

The executive director of think tank Center of Economic and Law Studies (CELIOS) added that imported inflation is also a result of weak currency exchange.

As the rupiah weakens, imports are costing more.

In July, the rupiah breached the 15,000 mark against the US dollar, its weakest position in two years.

It was around 14,800 against the US dollar for a few weeks before reaching 15,000 again last Friday.

Professor Sri Adiningsih from Yogyakarta’s Gadjah Mada University said that high prices of imported food and energy affect Indonesia even though the government has provided subsidies.

“Initially the effect was not felt even though other countries were already reporting inflation rates of eight or nine per cent.

“However, the government cannot safeguard everything,” said the professor who specialises in international and monetary economics.

The government provides subsidies in many areas including fuel, electricity and even rice.

The subsidies are meant to keep prices affordable, especially for the lower income people who comprise a substantial bulk of the country’s 270 million population.

When international prices soared, prices of goods in Indonesia also increased regardless of whether they are subsidised or not, Professor Adiningsih added.

For instance, she said that the price of oil internationally surged to as high as USD120 per barrel.