THE WASHINGTON POST – Although the pandemic and uncertainty about the future have put a damper on this year’s holiday festivities, we can still, as in years past, dress up our pets and stuffed animals and pretend they can talk. In the more indulgent universe of audiobooks, however, animals actually do talk, and not only in stories for children or edifying fables, but as fully fleshed characters with their own perception of reality. Their stories, whether comic, poignant or enlightening, offer some escape from our own worrisome world.

Nana, a tomcat of acerbic disposition, narrates much of The Travelling Cat Chronicles by Hiro Arikawa (translated from the Japanese by Philip Gabriel). A former stray, Nana was adopted by Satoru, a kindly man who, after five happy years, is forced to find the cat a new home.

The two set off to visit Satoru’s friends, a journey that becomes an immersion in Japanese culture. Along the way, we learn of the man’s tragic past and his relationship with his friends, each an engrossing, well-told tale. But Nana is the main attraction – as he, himself, would note. Narrator George Blagden beautifully captures the tenor of Nana’s mordant wit, his lofty view of himself, and his frequent spates of umbrage at human presumption and sheer stupidity. (“Jeez. Humans. They just don’t get things… Makes me sick.”) This is a highly entertaining and ultimately moving book.

Three Bags Full: A Sheep Detective Story by Leonie Swann (translated from the German by Anthea Bell) is an inspired comedy of incongruous worldviews. One morning, a flock of Irish sheep discover their shepherd, George, dead, impaled by a spade. “A single crow had settled on his Norwegian sweater and was studying his internal arrangements with professional interest.” What to do? As it was George’s practice to read to the flock every day – pulp fiction, fairy tales, and a book on diseases of sheep – their first task is to discover what sort of story they’re in. (“Let’s hope it’s not a story about the diseases of sheep,” bleats one.) As the sheep investigate the murder, they bestow ovine motives on human activity, resulting in a wonderfully peculiar whodunit, rich with humour and whimsy. Josephine Bailey narrates the book in a low, friendly voice, marvelously in tune with the sheep’s philosophy of life, their frequent bafflement, occasional bickering, and dedication to justice.

Perestroika in Paris by Jane Smiley is the story of Perestroika, called Paras, a racehorse who walks out of her stall with her trainer’s handbag at a track in Paris. Propelled by curiosity, she clip-clops unobtrusively through the city making friends with Frida, a dog; Raoul, a raven; a pair of ducks and rats; and Etienne, an eight-year-old boy living with his ancient great-grandmother. The animals talk among themselves – which is reasonable enough – but otherwise we are deep in fantasy land. This is a Paris of unprecedented friendliness and tolerance, where Frida can shop for food: presenting money, receiving change. The novel follows the adventures of Paras and her pals as well as those of the human beings they encounter. Magnanimity reigns. This is a book for bleak times. Suzanne Toren narrates the novel in benevolent tones, handling the many French names and places deftly, as if to the language born.

Tarka the Otter by Henry Williamson first published in 1927, is one of the great classics of nature writing, a glorious paean to the English countryside, its waterways and busy creatures.

Though filled with scenes of joy, adventure and companionship, this isn’t a book for the faint of heart: As in nature herself, there is death and, as in England of yore, blood sport. Set in Devon, the story follows Tarka, one of a litter of three otter cubs, from his birth through the years and seasons to his final, fatal encounter with his long-standing enemy, Deadlock, an “otter-hound”. Most events and activities are described as Tarka would experience them with occasional glimpses of the world as perceived by badger, pine marten, fox, owl, heron and raven. Michael Maloney reads this extraordinary book in gentle undulant tones for the most part, picking up speed and urgency as danger threatens, above all the otter hunt. The final chase is so stirring that, if you are driving, you will want to pull over.

The plot of Miss Benson’s Beetle, by Rachel Joyce revolves around a rare bug. It is 1950 and middle-aged Miss Margery Benson has lived a lonely, stultifying life. She teaches horrid girls at a London school, until one day she simply walks out and advertises for an assistant to accompany her to the French territory of New Caledonia to find a certain golden beetle. The assistant, a last resort, is Enid, a bouncy blonde with a much checkered past. No one could be less suitable or more troublesome, but eventually the two develop an odd, valiant friendship and a sense of their own power. Together they encounter cyclones, illness, French bureaucracy, tinned Spam, an unhinged stalker, and a startling development. Juliet Stevenson brings her lovely low voice and grace to the narration, ranging easily in accent through Britain’s social classes, from plummy British consul, clipped headmistress, refined Miss Benson down to Enid, a feisty cockney. This is a wonderful novel, brilliantly read. 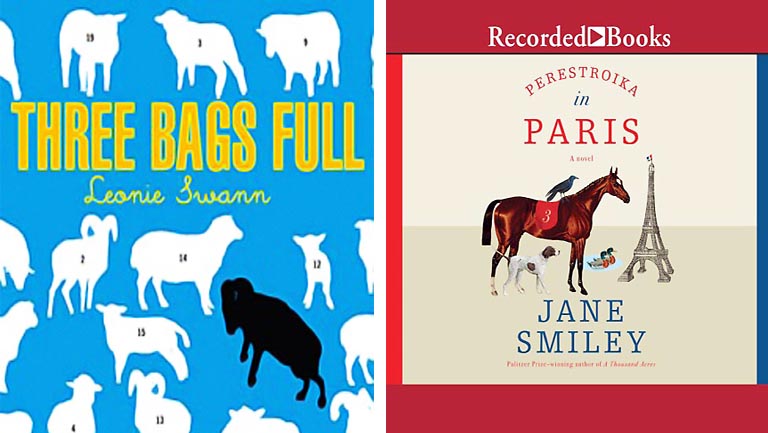