THE WASHINGTON POST – Let’s take one last look back to survey your favorite reads of 2020. They might inspire which titles you pick up in 2021. Here is a selection of books, from a variety of genres, to consider based on recent favourites.

If you enjoyed Little Disasters, by Sarah Vaughan, read The Push, by Ashley Audrain

What happens when a mother doesn’t love her daughter? Audrain’s debut is a tense, chilling dip into the dark side of motherhood, narrated by Blythe, whose own upbringing raises the question: Can one inherit an inability to parent? The Push is uncomfortable and provocative, like a train wreck that demands your gaze.

If you enjoyed Think Like a Monk, by Jay Shetty, read Think Again, by Adam Grant

If there hasn’t been enough room in your brain to give your own thoughts any thought, we hear you. But Grant, an organisational psychologist, coaches readers on how to better understand their unexamined – and unchallenged – beliefs. Think Again delivers smart advice on unlearning assumptions and opening ourselves up to curiosity and humility. 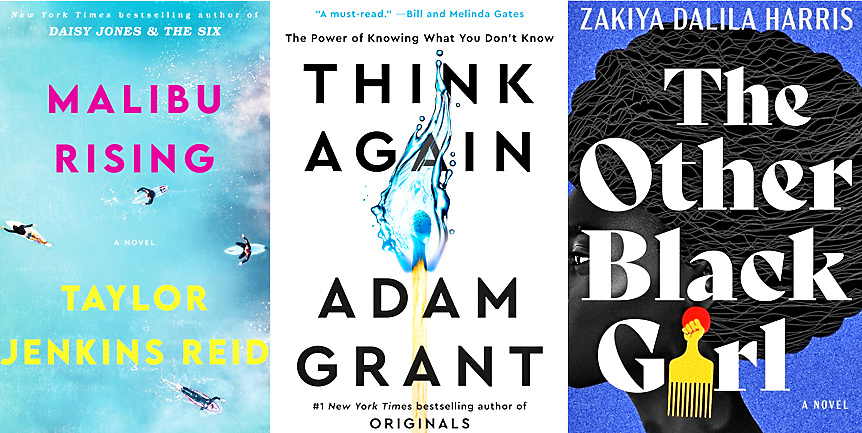 If you enjoyed The Particulars of Peter, by Kelly Conaboy, read When Harry Met Minnie, by Martha Teichner

In 2016, CBS News correspondent Teichner and her bull terrier, Minnie, were introduced to a woman dying of liver cancer. The woman wanted to ensure her own bull terrier, Harry, would have a good home when she was no longer around. The sweet – if wrenching – memoir is an ode to our dearest four-legged friends, and the people they lead us to.

If you enjoyed Agent Sonya: Moscow’s Most Daring Wartime Spy, by Ben Macintyre, read The Princess Spy, by Larry Loftis

In 1943, Aline Griffith, an American fashion model, was recruited by the Office of Strategic Services to hunt for Nazi supporters among Spain’s social elite. While there, she met and married a Spanish aristocrat, making her the Countess of Romanones. Loftis, a historian who’s written two previous nonfiction spy thrillers, delivers a rich, deeply researched account of Griffith’s espionage escapades.

If you enjoyed Transcendent Kingdom, by YaaGyasi, read Of Women and Salt, by Gabriela Garcia

This family saga centres on five generations of strong Latinas: Maria, one of the only women to work at a Cuban factory in the 1800s; Carmen, an immigrant who’s found success in the United States; Jeanette, who’s addicted to abusive men; and Gloria, who’s taken into custody by ICE, leaving her young daughter behind. Their stories are a mesmerising patchwork of determination, courage and survival.

If you enjoyed Joy at Work, by Marie Kondo and Scott Sonenshein, read Laundry Love, by Patric Richardson

Richardson loves doing laundry – yes, laundry. He’s made a fulfilling career out of it, running Laundry Camp at the Mall of America to teach others his techniques. In Laundry Love, he shares his favourite tips and hacks for sorting your laundry, figuring out which settings to use for the best results – and changing your relationship with the often dry task. Add it to your laundry, ah, reading list for spring.

If you enjoyed All Adults Here, by Emma Straub, read Early Morning Riser, by Katherine Heiny

When you enter a relationship with a man who has had relations with, well, half the town, things will probably get weird. Jane, the star of Heiny’s offbeat and funny new novel, falls for Duncan – who comes with an oversize load of small-town baggage. The story, which spans 17 years, sparkles with Heiny’s trademark witticisms and cutting observations.

It’s 1983 in Malibu, and the famous Riva siblings are hosting their annual end-of-summer party – a legendary affair. By morning, the house is in flames, a blaze fueled by smoldering secrets and long-simmering drama. Reid has once again crafted a fast-paced, engaging novel that smoothly transports readers between decades and story lines.

If you enjoyed When No One is Watching, by Alyssa Cole, read The Other Black Girl, by Zakiya Dalila Harris

Hulu has already snagged the rights to Harris’s bold debut, about a young editorial assistant who’s the only Black employee at a New York publishing company – until another woman arrives. Their budding friendship turns sinister as ominous notes hint at bad intentions. It’s a thrilling, edgier Devil Wears Prada that explores privilege and racism.

If you enjoyed You Should See Me in a Crown, by Leah Johnson, read Blackout, by Dhonielle Clayton, Tiffany D Jackson, Nic Stone, Angie Thomas, Ashley Woodfolk and Nicola Yoon

Talk about star power: Six YA powerhouses teamed up for this epic celebration of Black joy. As New York is blanketed in heatwave-rendered darkness, six young couples are forced to confront their feelings for each other, and about themselves. The story, which plays out over a single day, is a love letter to New York and teen romance.