‘Wendell & Wild’ is a dark and cold animated ride

AP – Just in time for Halloween comes a film that isn’t afraid to lean into the darkness, one frame at a time.

In the first five minutes of Wendell & Wild, our teen heroine loses her parents in a car accident, her town is economically gutted and she ends up in the back of a prison bus, her legs shackled and her hands cuffed.

This is cold stuff.

Director Henry Selick’s return to stop-motion animation is icy, from the slushy potholes on the roads to the vapour clouds that emerge from characters’ mouths.

His script with Jordan Peele is equally chilly, a place where alienation, backstabbing and plots abound.

Selick, whose previous films include The Nightmare Before Christmas, James and the Giant Peach and Coraline, has attracted a starry lineup of actors to supply voices this time: Ving Rhames, James Hong, Angela Bassett, David Harewood and Peele, reunited with his old comedy partner Keegan-Michael Key. 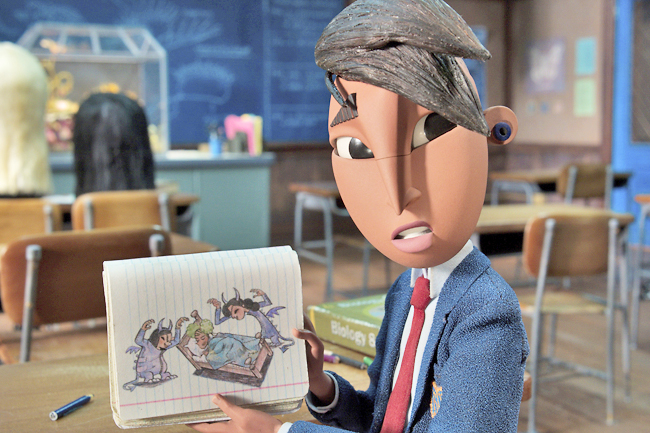 Peele and Key play the titular characters, a pair of mid-level, none-too-smart demon brothers who hope to escape drudgery in hell by escaping to the world of the living and opening a fun fair.

Unfortunately, their banter is a little hemmed in, a little less hysterical than anticipated.

They think they’ve found their way out of hell in the form of 13-year-old Kat Elliott (Lyric Ross), a goth-like rebellious orphan who has green hair, eyebrow piercings, knee-length platform boots and fingerless studded gloves. She carries a boombox and a doesn’t-play-with-others vibe.

“I don’t do friends,” she says. “Bad things happen to people I’m close to.”

It is a dark tale, with the action never far from the town’s cemetery and coffins seemingly always being cracked open.

There is a stab at social criticism involving an ominous for-profit company that wants to build a prison so badly it raises the dead to get the city council votes, and a parochial school willing to make a deal with these devils to stay open.

Throughout is Selick’s idiosyncratic vision. It takes a certain kind of ghoulish humour to bring a priest back from the dead with a hair-regrowth cream while our two demon brothers celebrate with high-fives as the soundtrack plays You Sexy Thing by Hot Chocolate.

In many ways, this film has the creepiness of The Nightmare Before Christmas fused with the girl-power of Coraline but for less pay-off than either.

The animation style includes the hyper-realism of backgrounds and thrilling details like a messy, bubbling pot of sauce or a rusted bulldozer to human characters who have seams on their faces and often long, skinny legs.

A pair of nuns resemble strange fat birds and skeletons with worms in their eyes stumble along. The nifty character designs are credited to designer Pablo Lobato.

Beneath it all is the story of a child’s love and guilt – and an education and judicial system letting her down – which propels her to bring her parents back from the dead, but that gets a little lost in the gross-out humour, Addams Family-level weirdness and shock-for-shock’s sake visual gags like a demonic teddy bear.

For all the lovingly crafted spectacle, Selick’s agonising, shot-by-shot film, is as overstuffed as that bear.