The night sky was illuminated by two infernos over the weekend, with no casualties reported in either incident.

At Kampong Pasai, Fire and Rescue Department (FRD) personnel spent 10 minutes taming a fire that ravaged through an extension area of a rented home.

DSO Yusof bin Bujang led a team of 15 firefighters from Jerudong and Pengkalan Batu fire stations to the scene, after a distress call was placed at 8.29pm, according to the FRD.

The team slipped on breathing apparatus and moved in with three hoses to douse the flames across the 25-metre-by-15-metre structure.

On the same night, minutes apart, another fire was reported, this time in the Temburong District.

ASO Haji Yussof bin Haji Jerudin led 11 personnel from the Bangar Fire Station after an 8.49pm distress call was received regarding a fire in Kampong Negalang.

Arriving at the scene, the team found the wooden-and-zinc home up in flames.

Moving swiftly, they contained the fire within three minutes. 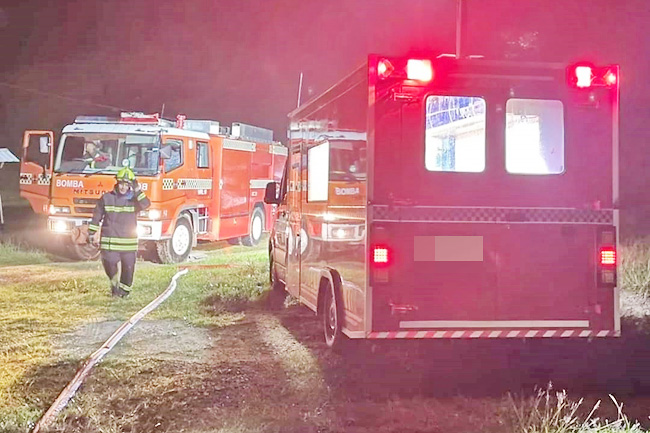 The cause and estimated losses of both fires are under investigation.

The public is reminded to ensure their homes are equipped with fire extinguishers, fire blankets and battery-operated smoke detectors, and that all wiring and electrical works be carried out by qualified technicians. Additionally, electrical appliances must be switched off after use or before leaving the house, and to unplug the gas regulator when not in use, the FRD said.