Four separate operations mounted by the Royal Customs and Excise Department (RCED) personnel resulted in 17 suspects being detained and the seizing of a sizeable volume of assorted contraband.

The team targetting two houses at Jalan Jaya Negara in Belait District on June 7 apprehended five foreign men and one permanent resident, between the ages of 21 and 62, for allegedly possessing five cartons, eight packets and 28 sticks of cigarettes.

The third operation on the same day zoomed in on a house in Kampong Beribi, where four locals and four foreigners were detained for the possession of nine units of shisha, 15 bottles of flavoured shisha, seven vapes, three vape pods and 33 sticks of cigarettes. A small container of dry leaves believed to be controlled drug was also found.

The containers and suspects – aged between 21 and 36 – were handed over to the Narcotics Control Bureau for investigation.

On June 8, enforcement officials raided a house at Jalan Berakas, detaining three foreigners, aged 40 to 48, for the possession of 128 bottles and 44 cans of alcohol, as well as two vapes and four vape accessories.

The team also discovered BND46,089 believed to be proceeds from the sale of the contraband.

All seized contraband and suspects were hauled to the enforcement office for investigation. 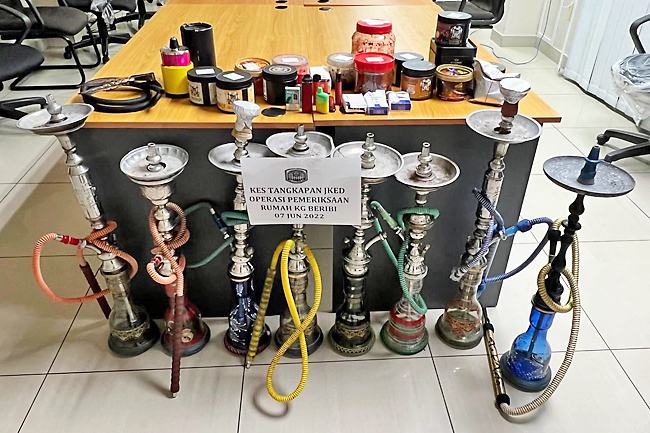