It was organised to keep the participants informed of the government’s efforts to improve the standard of living and inspire them to take up entrepreneurial activities, according to Acting Senior Information Officer Muhd Khairulhadi bin Haji Muhd Muhtaddir.

The programme saw a briefing by Head of Nationhood Unit and Strategic Communications Division Assistant Information Officer Hajah Noorhijrah binti Haji Idris aimed at instilling the love for the monarch and nation as well as reminding them of their roles and responsibilities.

The Sekretariat Tetap Wawasan Brunei 2035 at the Prime Minister’s Office gave a briefing on the national vision and shared initiatives and developments in education, human resources, health infrastructure and the productivity of the public sector. The Royal Customs and Excise Department (RCED) gave a briefing on Customs Order 2006 and Excise Order 2006; restricted and prohibited items; various procedures; duties and taxes; and customs offences and penalties. 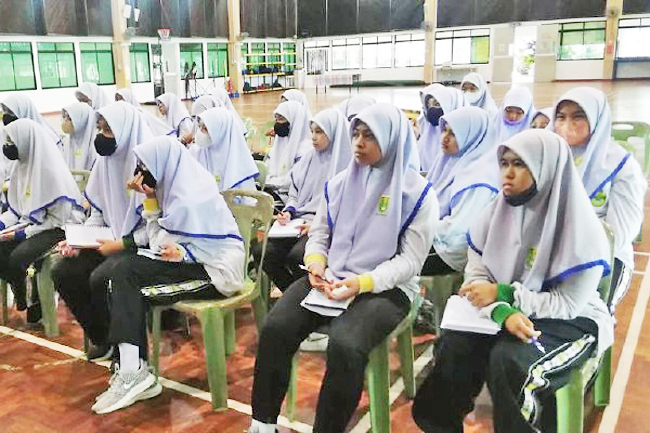 The participants were also briefed on cybercrime, including personal information that can be used by cybercriminals to commit organised crime; dangers of social media; cyberbullying and online fraud; and scams, phishing and extortion.

They also toured the Fire and Rescue Department at Jalan Airport Lama in Berakas.

The briefing was delivered by Hajah Noorhijrah. The students were taught the procedure to hoist the national flag and care for it as well as information on the national anthem.

They also watched an animation and took part in quizzes where winners received prizes.