‘We want to go back’

DHAKA, BANGLADESH (AP) – Hundreds of thousands of ethnic minority Rohingya refugees marked the fifth anniversary of their exodus from Myanmar to Bangladesh on Thursday, as the United States (US), the European Union (EU) and other Western nations pledged to support the pursuit of justice in international courts.

At a sprawling camp in Bangladesh’s Cox’s Bazar district, thousands of refugees gathered to commemorate what they term Genocide Remembrance Day, with speakers demanding safety from persecution inside Myanmar so they can return to the country.

A refugee at the Kutupalong camp sang a song describing their suffering on the way to Bangladesh five years ago, braving bullets, forests and the sea. Many in the crowd cried as they listened.

On Thursday, the United Kingdom (UK) announced a further round of sanctions targetting businesses linked to Myanmar’s military, which rules the country.

It said those being sanctioned in an effort to limit the military’s access to arms and revenue include Star Sapphire Group of Companies, International Gateways Group and Sky One Construction.

UK minister for Asia Amanda Milling also confirmed Britain’s intention to intervene in a November 2019 case against Myanmar initiated by The Gambia seeking justice in the International Court of Justice, the principal judicial organ of the United Nations (UN). The case will determine whether Myanmar has violated the Genocide Convention through the military’s acts against the Rohingya in 2016 and 2017.

More than one million Rohingya refugees have fled to Bangladesh from Myanmar over several decades, including about 740,000 who crossed the border starting in August 2017 when the Myanmar military launched a “clearance operation” against them following attacks by a rebel group. The safety situation in Myanmar has worsened since a military takeover last year, and attempts to send them back have failed. 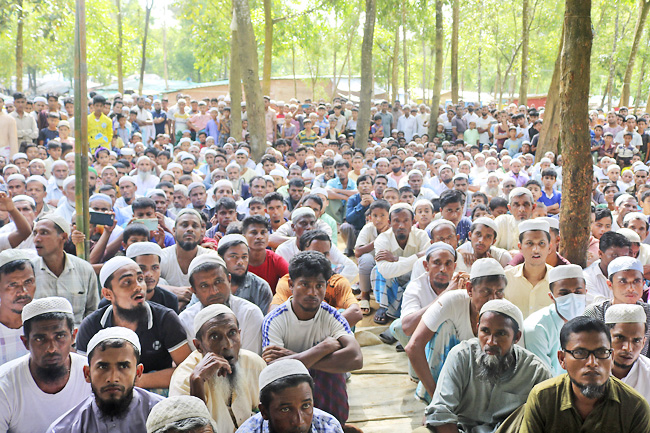 In March, the US said the oppression of Rohingya in Myanmar amounts to genocide after authorities confirmed accounts of mass atrocities against civilians by the military in a systematic campaign against the ethnic minority.

Muslim Rohingya face widespread discrimination in Buddhist-majority Myanmar, where most are denied citizenship and many other rights.

Bangladeshi officials have expressed frustration after at least two attempts to repatriate the refugees to Myanmar failed since 2017.

Prime Minister Sheikh Hasina said their repatriation is the only solution to the crisis, but that Bangladesh would not force them to go back.

On the eve of the anniversary, Bangladesh Home Minister Asaduzzaman Khan said his country wants to ensure the refugees can return “to safe conditions in Myanmar where they will no longer be persecuted and will finally receive citizenship”.

“We urge the international community to work alongside us to provide support to the Rohingya people, by asserting pressure on Myanmar to stop the mass persecution and allow Rohingya safe repatriation to their homes,” he said.

The UN Special Envoy on Myanmar Noeleen Heyzer who is visiting Bangladesh, said its continued hosting of the refugees “requires renewed international attention and equitable burden-sharing by countries in the region and abroad”.

“I will continue to advocate for greater leadership of countries in the region in supporting Bangladesh and leveraging their influence with Myanmar to create conducive conditions for the voluntary, safe and dignified return of refugees,” she said.

At the Kutupalng camp, 33-year-old Jamalida said she wished to return.

“We had homes and we were rich there, we could bear our own expenses, and we did not have to rely on someone else’s pocket,” she said. “We want to go back to our country with our rights.”

The Rohingya crisis has gone to international courts, where Myanmar has denied any wrongdoing. But global powers are not satisfied with Myanmar’s position.

In a statement, US Secretary of State Antony Blinken said on Wednesday that the US remains “committed to advancing justice and accountability” for Rohingya and all people of Myanmar, also known as Burma.

“We continue to support the Independent Investigative Mechanism for Myanmar, the case under the Genocide Convention that The Gambia has brought against Burma before the International Court of Justice, and credible courts around the world that have jurisdiction in cases involving Burmese military’s atrocity crimes,” Blinken said.

Separately, a joint statement by the High Representative on behalf of the EU and the foreign ministers of Australia, Canada, New Zealand, Norway, the UK and the US said they are concerned by a UN fact-finding mission’s determination of patterns of serious human rights violations and abuses, including many amounting to grave crimes under international law.

Bangladesh and Myanmar signed a Chinese-brokered agreement in November 2017 on the repatriation of the refugees. Bangladesh earlier this month sought China’s assistance in repatriating Rohingya during a visit by Chinese Foreign Minister Wang Yi.