Ways to make your apartment happier

THE WASHINGTON POST – Living in a small space has always required compromises, and with many of us now working from home indefinitely, our environs can feel even tighter than they used to.

The potential mental health consequences of feeling confined by your space became especially obvious during the worst of the pandemic, when “a lot of people felt very closed in, and it caused anxiety and some depression”, said health psychologist at Texas Tech University School of Medicine Kathleen Kendall-Tackett. But while it’s true that compact spaces can feel claustrophobic or stressful, they can also feel calming and cozy with the right approach. As professor of psychology at James Madison University Jaime Kurtz pointed out: “As a species, we evolved in small spaces. We didn’t evolve to live in 3,000-square-foot houses.”

Maybe it shouldn’t come as too much of a surprise, then, that there are science-backed methods of turning a tight space into a happier, healthier place to exist. Here are a few of them.

Researchers have found that a cluttered space can feel physically and psychologically overwhelming. One 2017 study, published in Current Psychology, associated living amid clutter with reduced productivity and chronic procrastination.

This is one problem with a straightforward remedy – you can purge your home of things you don’t need, and better organise the items you want to keep. Try adding storage systems that take advantage of vertical space, such as stackable shelves. Drawers and boxes that fit beneath furniture are also ideal when you’re working within limited square footage. However you do it, “getting rid of clutter is unbelievably liberating because all of a sudden you can live more efficiently”, said author of The Well-Ordered Home Kendall-Tackett,

Plus, said Kurtz, an expert on happiness, “When you have so much stuff, it’s hard to savour it and appreciate it. When you carefully curate it, you can appreciate what you have.” 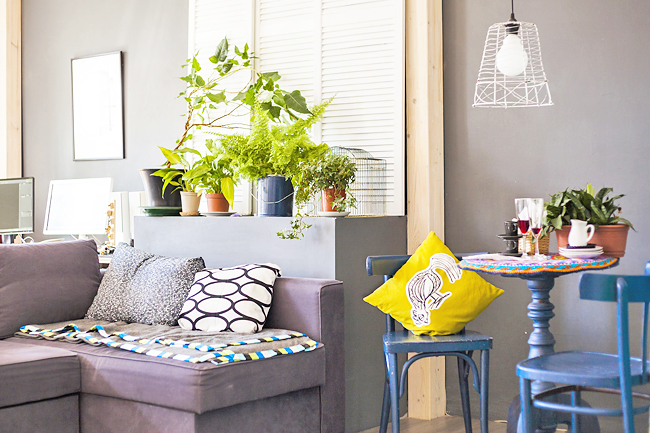 If you share your home with someone else, differentiate between my space and your space, said Kendall-Tackett. This can be done, she said, simply by recognising and respecting designated zones in a particular room or by setting up a room divider for privacy. Also, if you’re on a Zoom call or watching TV, use headphones.

USE COLOUR TO YOUR ADVANTAGE

The common wisdom that a small space feels larger when it’s painted with lighter colours generally holds true, according to mental health experts, because pale walls reflect more light and make rooms feel more open. That doesn’t mean you need to stick with all white walls, though. Go with “tints of colours that can make the space seem larger – use cooler colours like a light tint of blue on the wall”, advised Environmental and Design Psychologist Sally Augustin in Chicago (her firm Design With Science uses principles from neuroscience to create spaces that foster well-being). Besides having an enlarging effect, cooler colours tend to feel relaxing, she added. “And if the ceiling is a light colour, it can make it feel farther away from the floor.”

For accents, “choose a few brightly coloured things like pillows” to make the space feel cheerful, suggested Kurtz. “That’s the nice thing about small spaces – one thing can have a big impact.”

Mirrors are a tried and true tool for bringing in light and creating the illusion of a larger space, especially when hung opposite a window. Figure out where in your space you might be able to add one or two more of them.

Researchers in China found in a study that “rounded features and curved lines tend to be linked to pleasantness and happiness”, while “diagonal and angular configurations tend to be associated with threat”. As such, Augustin recommended investing in an area rug with a curvy design, rather than something too geometric.

Similarly, incorporating soft textiles – with velvety or fleecy throws and pillows, for example – can foster a more relaxing environment, because touching soft surfaces may release oxytocin, according to Kendall-Tackett, a hormone that has a calming effect.

“You have oxytocin receptors in your hands,” she explained.

Infusing your home with a pleasant scent can create an upbeat mood. Cinnamon has anti-anxiety and antidepressant effects, according to research from Iran, so try simmering cinnamon sticks and orange peel in water on the stove. Or, just light a scented candle or use an atomizer with an essential oil. Augustin recommended choosing a “scent that reminds you of wide-open spaces”, to make your small space feel bigger.

According to a 2021 study at Konkuk University in South Korea, people experience significantly higher scores on measures of comfort, relaxation and positive moods when looking at real plants. Thus, it’s ideal if you have a window with a view of green space. But you can also bring some nature inside with houseplants. Kurtz pointed out an added perk: Real plants oxygenate the air and make a room feel less stuffy.

If you can’t take care of real plants, even just incorporating photographs of nature can evoke a pleasant, restful mood, said Augustin. So, too, can listening to sounds from nature – such as a burbling brook, rustling leaves, singing birds, or rolling ocean waves. One study at Chiba University in Japan found that exposure to forest sounds decreases sympathetic nervous system activity (which triggers the body’s fight-or-flight response) and heart rate, while inducing comfortable, relaxed feelings and improved moods. (Myriad apps with a variety of nature sounds are available for Androids and iPhones).

Ultimately, you can use design and sensory influences to “make the space feel larger and more comfortable for you,” Augustin said.

“Having a sense of control over your home gives you a psychological boost.”