PARIS (AFP) – Households in Europe and North America are flooding the oceans with plastic pollution simply by washing their clothes, scientists said recently after research found the majority of microplastics in Arctic seawater were polyester fibres.

Plastic particles have infiltrated even the most remote and seemingly-pristine regions of the planet.

These tiny fragments have been discovered inside fish in the deepest recesses of the ocean – the Mariana Trench – peppering Arctic sea ice and blanketing the snows on the Pyrenees mountains between France and Spain.

But questions remain over exactly where this plastic contamination is coming from.

In the new study by the Ocean Wise conservation group and Canada’s Department of Fisheries and Oceans, researchers sampled seawater from across the Arctic and found synthetic fibres made up around 92 per cent of microplastic pollution. 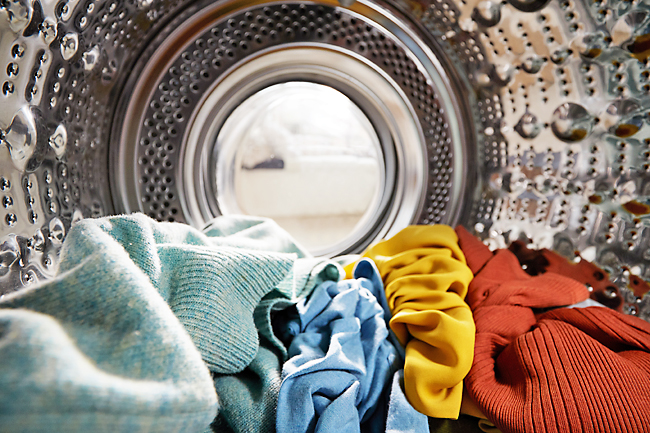 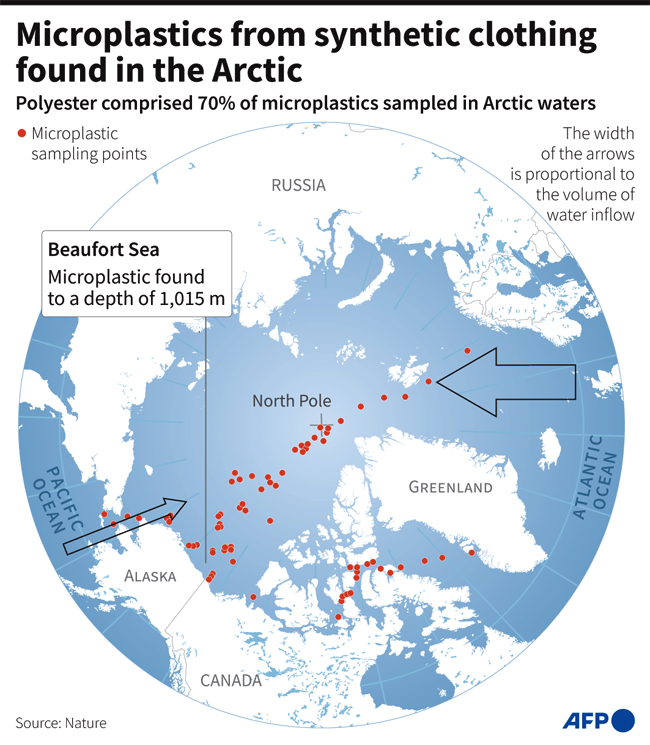 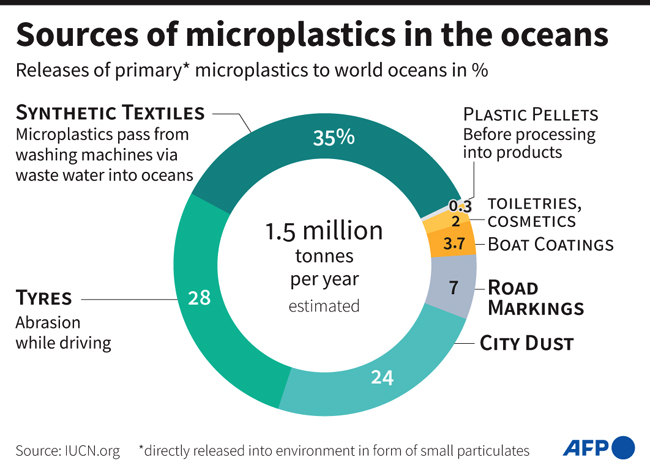 Of this, around 73 per cent was found to be polyester, resembling the dimensions and chemical identities of synthetic textiles – particularly clothing.

“The striking conclusion here is that we now have strong evidence that homes in Europe and North America are directly polluting the Arctic with fibres from laundry (via wastewater discharge),” said lead author Peter Ross of Ocean Wise and the University of British Columbia.

He said the mechanisms for this remain unclear, but added that ocean currents appear to play a major role in transporting the fibres northwards, while atmospheric systems may also contribute.

“Plastics are all around us, and while it would be grossly unfair to specifically point our finger at textiles as the only source of microplastics to the world’s oceans, we nonetheless see a strong footprint of polyester fibres that are likely to be largely derived from clothing,” he told AFP.

Researchers collected near-surface seawater samples along a 19,000 kilometre section from Tromso in Norway to the North Pole, through the Canadian Arctic and into the Beaufort Sea, where they also analysed some samples up to a depth of around 1,000 metres.

“We found microplastic in all but one sample, underscoring the widespread distribution of this emerging pollutant in this remote region,” said Ross.

Researchers used microscopy and infrared analysis to identify and measure the microplastics, which they defined as shreds of plastic smaller than five millimetres.

With almost three times more microplastic particles found in the eastern Arctic compared to the west, the authors suggested that new polyester fibres could be being delivered to the east of the region by the Atlantic.

Ocean Wise has run tests on washing machines and estimates that a single item of clothing can release millions of fibres during a normal domestic wash.

The organisation has also warned that wastewater treatment plants are often not catching the plastic fibres, calculating that households in the United States and Canada could collectively release some 878 tonnes of microfibres annually.

“The textile sector can do much to design more sustainable clothing, including by designing clothes that shed less,” said Ross, while governments could make sure wastewater treatment plants have installed technologies to remove microplastics and incentivise innovation.

Households can also play their part by choosing products made with more environmentally friendly fabrics and installing lint traps on their washing machines, Ross added.

In 2019 a study published in Science Advances concluded that a large quantity of microplastic fragments and fibres are transported by winds into the Arctic region, and then hitch a ride Earthward in snowflakes.

Several million tonnes of plastics also find their way each year directly into oceans, where they are broken down into microscopic bits over time.

In the last two decades, the world has produced as much plastic as during the rest of history, and the industry is set to grow by four percent a year until 2025, according to a 2020 report by Grand View Research.