Prior to an audience ceremony, Their Majesties welcomed the arrival of the president and spouse at Istana Nurul Iman. Their Majesties and the visitors then received the salute of honour on the special dais, accompanied with the national anthems of both countries and a 21-gun salute. The two leaders then inspected the guard of honour mounted by members of the Royal Brunei Armed Forces.

The president and spouse were then introduced to members of the royal family; Yang Amat Mulia Pengiran-Pengiran Cheteria; the Speaker of the Legislative Council; Cabinet ministers; members of the Privy Council; deputy ministers; permanent secretaries at the Prime Minister’s Office and the Ministry of Foreign Affairs; and foreign envoys as well as their spouses. 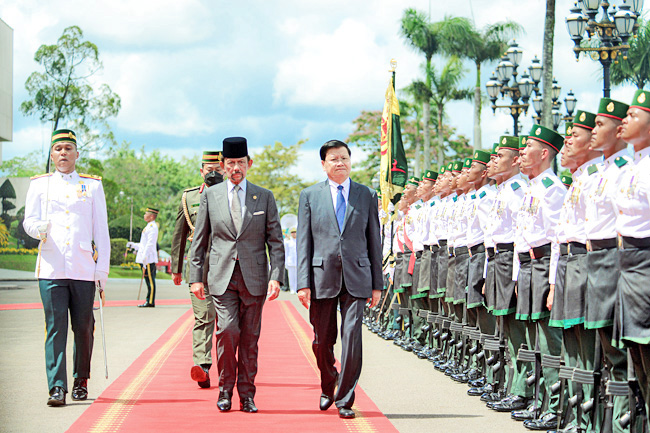 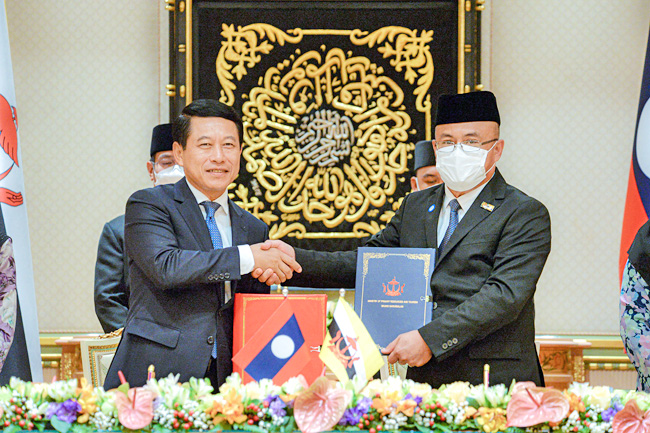 Their Majesties were then introduced to members of the delegation of the president.

Also included in the Lao delegation were Lao Deputy Prime Minister and Minister of Foreign Affairs Saleumxay Kommasith and spouse.

After the audience ceremony, His Majesty proceeded together with the president to Baitul Mesyuarah for a bilateral meeting.

During the meeting, the monarch and the president welcomed the expansion of cooperation in existing areas, as well as exploration of new opportunities, towards further strengthening the friendship between the peoples of Brunei and Laos.

His Majesty and the president also agreed that food and supply chain security was particularly relevant amidst geopolitical uncertainties and welcomed the signing of two agreements between both nations.

The first was the MoU on Agricultural Cooperation.

The MoU aims to strengthen, facilitate and develop cooperation and collaboration in the fields of agriculture including agrifood, agro-technology, productivity with standard and quality. Scope and areas of cooperation include sharing and exchange of information; exchange of publications such as laws, regulations and guidelines; capacity building; technical cooperation; and other forms of cooperation relating to agricultural activities.

The second agreement was the MoU on Energy Cooperation.

The MoU aims to facilitate and enhance meaningful and effective energy cooperation between Brunei and Laos. It enables relevant entities to enter into commercially and financially viable arrangements within cooperation in the potential of export and import of petroleum and petroleum products; the potential of renewable and alternative energy development including the respective technologies; and explore experiences and enhance capacity building between the two countries.