AMMAN (AFP) – He was once dubbed the ‘King of Shoes’, but after decades of fashioning footwear for kings, queens and presidents, 90-year-old Jamil Kopti fears cheap imports are killing off his craft.

“We started losing customers one after another, and we kept losing stores until we closed down three shops,” said Kopti, believed to be Jordan’s oldest maker of handcrafted shoes.

“In the past five years, our profession began to decline dramatically in face of imported foreign shoes that flooded the market,” he sighed, surveying his once prosperous workshop.

Now he has just five workers, a far cry from the 42 staff he used to employ.

And around the workshop in the popular Al-Jofeh district of Amman, hundreds of moulds lie gathering dust.

After entering the trade in 1949 at just 18, Kopti attended shoe fairs every year in Bologna and Paris.

In 1961, at a show at the University of Jordan, he met the late King Hussein and gifted him four pairs of handmade shoes. 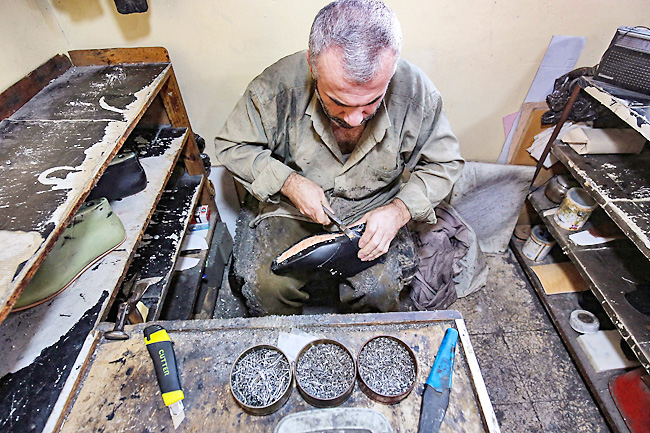 Hussein became an instant fan, particularly of black, formal shoes, and “after that, and for 35 years, I made the king’s shoes”.

“He loved classic shoes,” said Kopti, proudly showing off two old photos on his phone of him and the late monarch.

He was awarded Jordan’s Independence Medal and was a frequent palace guest on special occasions.

In 1964, the monarch visited France where he met then president Charles de Gaulle.

“All the time during the meeting… he had his eyes on my shoes and when he asked me where I got them from I told him ‘They were made in Amman’,” the king told Kopti.

According to the country’s Shoe Manufacturers Association, there used to be over 250 shoe workshops and factories in Jordan, employing about 5,000 people.

Today “we have around 100 workshops and less than 500 workers”, said head of the association Naser Theyabat. During his long career, Kopti has made shoes for the new King Abdullah II and most of Jordan’s princes and princesses, as well as top politicians and military officers.

Using imported leather from France, Italy, and Germany, his workshop once made 200 pairs of shoes a day.

Nowadays it is more like 10 pairs, forcing him to turn to medical shoes and children’s footwear.

But Kopti believes his loyal customers will help him survive, pointing to one client he has served for 50 years.

Handmade leather shoemakers had a “golden age” in the 1980s and 1990s, recalled Theyabat.

However with time, imports have increased.

These figures are likely to decrease due to the repercussions of the epidemic.

“This craft is on the verge of extinction,” said Theyabat, lamenting that Jordanian shoemakers received little support.

“On the contrary, there was a policy to flood the market with Chinese-made shoes.”

In the Marina workshop in an old building of the Ashrafiyeh district, three shoemakers were sewing on soles, adding heels, and trimming off leather, watched by owner Zouhair Shiah.

“The terrible decline started in 2015 when the market was flooded with Chinese, Vietnamese, Syrian and Egyptian-made shoes,” the 71-year-old told AFP.

Holding up a shoe, he pointed out it was “strong and durable” and said the pair cost JOD20 (USD28). “Our profit is very low.”

Shiah is hoping for government support to “reduce taxes…because we have debts that we
cannot pay”.

Bent over a machine cutting leather, white-haired Youssef Abu Sarita recalled: “I started doing this 50 years ago. I love this job and know nothing else.

“What is happening to us is sad. Most of the workshops closed and their workers have left,” he said.

“I am sure that we will face the same fate, but I do not know when.”