QADIS, AFGHANISTAN (AFP) – Survivors of twin earthquakes in Afghanistan were waiting on Wednesday for aid to arrive after spending their second night exposed to sub-zero temperatures following tremors that killed at least 22 people and wrecked homes.

Rescuers continued to comb through debris in search of survivors from Monday’s quakes, which jolted Qadis district in the western province of Badghis, damaging hundredsof buildings.

Many survivors spent a second straight night out in the open while some took shelter in tents on Tuesday night, an AFP correspondent reported.

Scattered aid has begun to reach the area but the vast majority of victims are still awaiting assistance.

“We lost everything that we had. We are homeless. Everything is buried under the rubble,” Abdul Rahman, a survivor whose house in Qadis was damaged, told AFP
late Tuesday.

When the tremors began “everybody started screaming”, he said. “Everyone from every house just ran out from their homes and fled.” 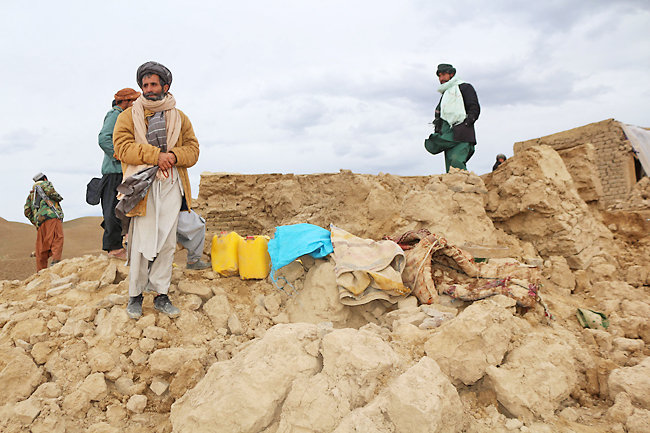 Footage of the earthquake’s aftermath showed completely destroyed mud houses, with survivors including children searching the ruins for their belongings.

One man, his face covered in mud, could be seen walking through the debris carrying an infant, as clothes, carpets and household items lay scattered around.

“We were buried under the walls… only our heads were out of the mud,” said Khair Mohammad, another resident. “We are alone here. We all live far from each other.”

Many fear that rain could make houses even more vulnerable to collapse, exacerbating the crisis.

The Taleban government said up to 1,000 houses had been damaged and that tents, food and medicine were being sent to the victims.

The epicentre of the quake was near the city of Qala-i-Naw, the capital of Badghis, less than 100 kilometres from the Turkmenistan border, according to the USGS.

Afghanistan is already in the grip of a humanitarian disaster, worsened by the Taleban takeover of the country in August when Western countries froze international aid and access to assets held abroad.

The United Nations has said Afghanistan needs USD5 billion in 2022 to avert the ongoing catastrophe. A devastating drought has compounded the crisis, with Qadis one of the worst affected areas.

Afghanistan is frequently hit by earthquakes, especially in the Hindu Kush mountain range, which lies near the junction of the Eurasian and Indian tectonic plates.

Even weak quakes can cause significant damage to poorly built homes and buildings in the impoverished country.

In 2015, more than 380 people were killed in Pakistan and Afghanistan when a 7.5-magnitude earthquake ripped across the two countries, with the bulk of the deaths in Pakistan.