THE WASHINGTON POST – Talib Kweli was an up-and-comer when fellow New York rapper Jay-Z, just a few years older than him but already an icon, gave him a co-sign on Moment of Clarity, a track from his legendary 2003 release, The Black Album: “If skills sold, truth be told/I’d probably be lyrically Talib Kweli.”

It wasn’t entirely a compliment. But Kweli took it as one. “The mere mention of my name in a Jay-Z song gave me industry credibility that years of making great hip-hop had not,” Kweli wrote in his new memoir, Vibrate Higher: A Rap Story.

The push-pull between commercial hip-hop and Kweli’s message-driven, occasionally preachy and invariably less popular conscious rap is one of the main preoccupations at the heart of the swift, sturdy Vibrate Higher.

Kweli was born Talib Kweli Greene to parents who were educators and Black cultural nationalists. “The literal translation of Talib Kweli is ‘seeker of truth and knowledge’,” Kweli wrote.

He was raised in Brooklyn during the dawning age of rap, which back then still felt like a secret. “Hip-hop sank its teeth into me and never let go,” Kweli wrote. By the time he got to junior high school, he was writing rhymes non-stop. By freshman year of high school, he was engaging in daily lunchroom rap battles. 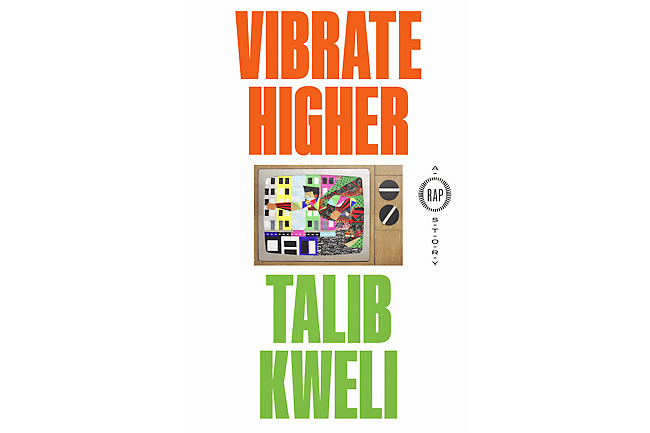 Kweli briefly attended NYU, where he was an indifferent student. Hip-hop crowded out everything else, but success seemed increasingly out of reach.

Arrested for a series of minor offences, he wondered, “Was I on course to be yet another statistic? It didn’t matter that I had both parents in my life, a great childhood, and a decent education. I was beginning to fall into traps that were set for me a long time before I
was born.”

Kweli eventually befriended fellow Brooklyn MC Yasiin Bey, who records as Mos Def. In 1998, the duo released the still-unmatched Mos Def & Talib Kweli Are Black Star, which cemented the rappers’ reputations and launched their solo careers. It was a milestone in socially conscious underground hip-hop. “While Diddy and Jay-Z were ruling around the world with tales of cars, and women, Black Star brought lyricism and consciousness back to the forefront of the conversation,” Kweli wrote.

The first half of Vibrate Higher is a plain-spoken striver’s tale that affectingly charts Kweli’s rise to the middle. It flags only slightly in its discography-centric second half, a blur of albums and tours, recording sessions and label troubles. The book’s uneven last pages detail Kweli’s work with the then-nascent Black Lives Matter movement. A passage about his participation in the protests in Ferguson, Missouri, where he was tear-gassed, is among the most moving. A lengthy section on the Trump administration seems less essential.

Vibrate Higher ends before last summer’s Black Lives Matter uprisings, though not before its author discovered Twitter, where he established a lively and sometimes contentious presence. “The more famous you are,” he wrote, “the more people hate you.”

As the book ends, Kweli, like Jay-Z, questions his choices. He is a respected figure, but, thanks to a career-long pursuit of substance over style, not a rich one. “I know I am a great lyricist not because others say it but because of the time I have spent dedicated to my craft,” he wrote in an earlier passage. “I know it whether you do or not.”