STOCKHOLM (AFP) – The Nobel Economics Prize was yesterday awarded to a United States (US) trio for their contributions on explaining the role of banks in the economy.

Ben Bernanke, Douglas Diamond and Philip Dybvig were given the nod for having “significantly improved our understanding of the role of banks in the economy, particularly during financial crises, as well as how to regulate financial markets”, the jury said.

“Their analyses have been of great practical importance in regulating financial markets and dealing with financial crises,” it added.

Bernanke, 68, the chair of the US Federal Reserve between 2006 and 2014, was highlighted for his analysis of “the worst economic crisis in modern history” – the Great Depression in the 1930s.

Diamond, a professor at the University of Chicago born in 1953, and Dybvig, 67, a professor at Washington University in St Louis, were in turn honoured for showing how “banks offer an optimal solution” for channelling savings to investments by acting as an intermediary.

The economics prize, set up by the Swedish central bank, was the only award absent from the original five created by scientist Alfred Nobel, sometimes earning it the moniker of “false Nobel”.

But like the other prizes it comes with a medal and an award sum of SEK10 million (around USD900,000). 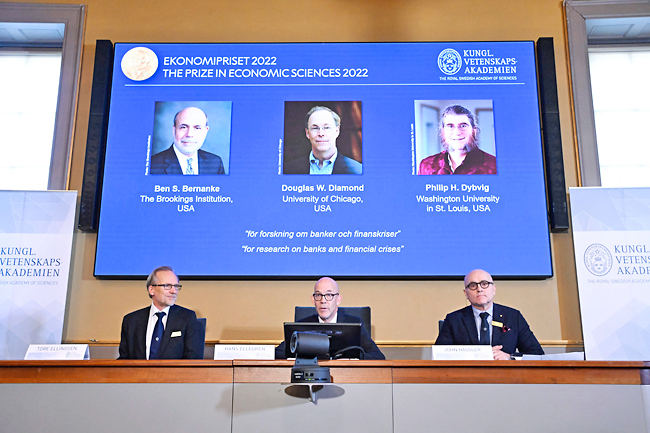