US storm survivors ask for less red tape in aid

AP – Survivors of storms that pounded several American states said the nation’s disaster aid system is broken and that they want reforms to get money into victims’ hands faster, with less red tape.

On the 10th anniversary of Superstorm Sandy’s landfall at the Jersey Shore, devastating communities throughout the northeast, survivors gathered on Saturday with others who went through hurricanes Harvey, Irma, Maria and Ida along with victim advocacy groups from New Jersey, Florida, Texas, Louisiana and Puerto Rico.

Robert Lukasiewicz said Sandy sounded like “a hundred freight trains” as it roared past his Atlantic City, New Jersey, home on October 29, 2012. Contractor fraud set his recovery efforts back and work by a second contractor stalled because of lack of funds, Lukasiewicz said.

After waiting two years for a government aid programme, he said he finally found out he needed to have flood insurance first – the price of which had by then soared to unaffordable levels.

“If all these things had been steps instead of missteps, I could have been home years ago,” he said.

“You’ve got different systems that are all butting heads and blaming the other side, when the homeowners and families that all of this was designed for are suffering.” 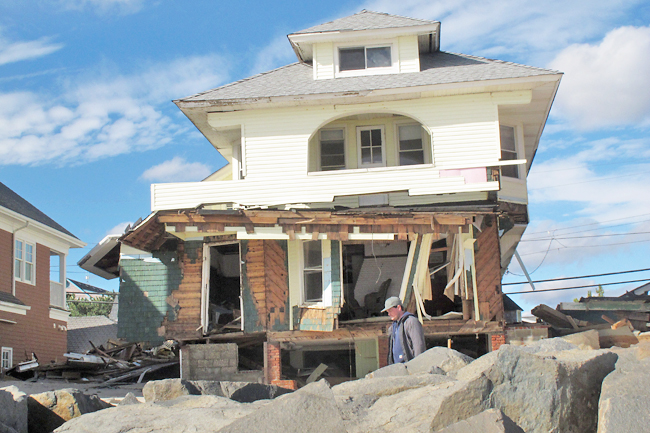 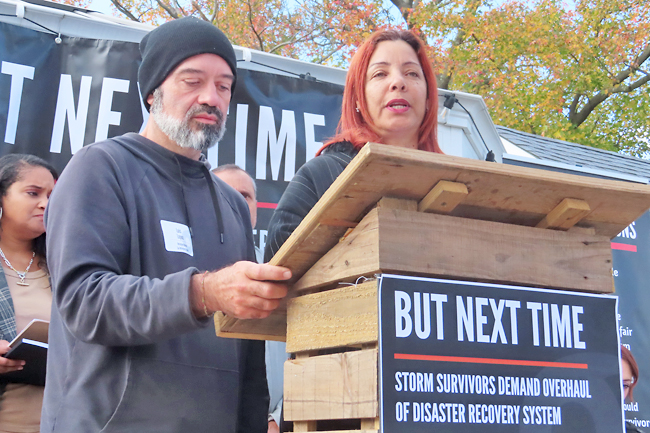 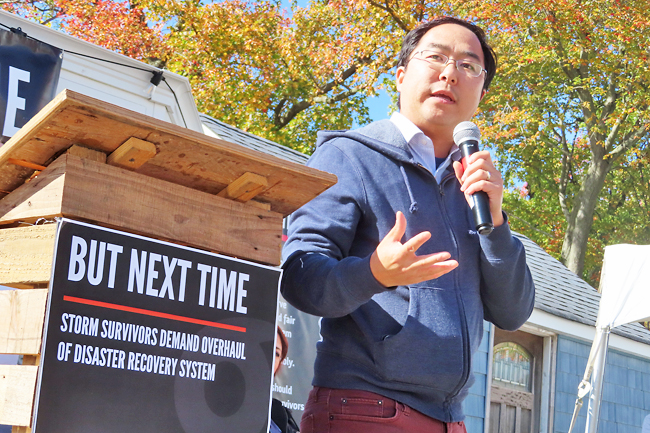 Specific recommendations call for a single point of application for the numerous local, state and federal assistance programme; imposing a smaller cap on annual flood insurance premium rate increases; giving storm victims direct payments and health insurance for a period after the storm; restructuring loan repayment or aid overpayment “clawbacks” to take into account a storm survivor’s ability to pay; and paying 100 per cent of mitigation costs upfront for low-income storm victims instead of reimbursing them after they pay for the work.

Joe Mangino, whose Jersey Shore home was damaged by Sandy, co-founded the New Jersey Organizing Project, which brought storm survivors together on Saturday.

“Surviving the actual storm was the easy part,” he said. “There was a disaster after the disaster.”

For Ute Schaefer of Houston, it was the snakes that flowed into her home with flood waters that trapped her inside for four days, banging on windows for help until a passing boat rescued her – and dumped her on the shoulder of a highway.

“I was grasping for anything, but there was nothing there,” she said.

Shanna Hebert, a single mother from Houma, Louisiana, is about to lose her house that was left unlivable by Hurricane Ida last year. Her one-year mortgage forbearance agreement is ending, and the company wants USD17,000 by next week or it will foreclose.

She said her insurance company declared bankruptcy, forcing her to buy a trailer with her own money.

Millie Santiago fled Canóvanas, Puerto Rico, for Florida after Hurricane Maria in 2017, only to encounter multiple impediments to emergency aid, including housing.

“They were asking two to three times the normal rent, up front,” she said. “A disaster should not be an opportunity for corporations and contractors to get rich off the suffering of survivors.”

“That’s been the goal, to get aid to people while their house was flooded,” he said. “That’s taxpayer money, so we have to be cautious, not just throwing it away, making sure it gets to the right place and is properly used. We’re trying to get to a mechanism that allows for
quicker relief.”

He said the idea for a single application point for storm aid is good, but cautioned that federal privacy laws restrict information sharing with state and local governments without first getting signed releases, which can take weeks.

And a post-Ida aid program designed to be fast-tracked so applicants could learn within two weeks whether they had been approved took eight months to be reviewed by federal budget monitors, Moriarty said.

“It was within the first year but not within the goal of the first month,” he said. “I think that will get better and better.”

“You have not gotten what you deserve over the last 10 years,” he said. “What good is a government if it does not stand with people in their time of greatest need?