US new home sales surge in March to 15-year high

WASHINGTON (AFP) – Sales of new homes accelerated last month across most of the United States (US), jumping to a 15-year high and more than recovering from cooling caused by winter storms in February, the government reported on Friday.

The supply of homes for sale continues to be a limiting factor, but most economists expect robust demand to continue in the hot housing market that has been a bright spot in the world’s largest economy in the year of the COVID-19 pandemic.

The 20.7 per cent surge in March pushed the annualised sales rate to more than 1.02 million single-family homes, the Commerce Department reported, its highest level since August 2006 before the mortgage market implosion sparked the 2008 global financial crisis.

Unlike the frenzied activity in the lead up to that crisis, rising mortgage rates caused six weeks of declines in home loan applications, before a dip in interest rates last week fuelled a slight rebound from would-be homebuyers.

The annual sales rate was nearly 67 per cent higher than in March 2020 when the COVID-19 pandemic hit the US economy, according to the data.

The rebound was much bigger than analysts were expecting, and ran contrary to the 3.7 per cent decline in existing home sales last month, a far larger market that was chilled by tight supply and rising prices. 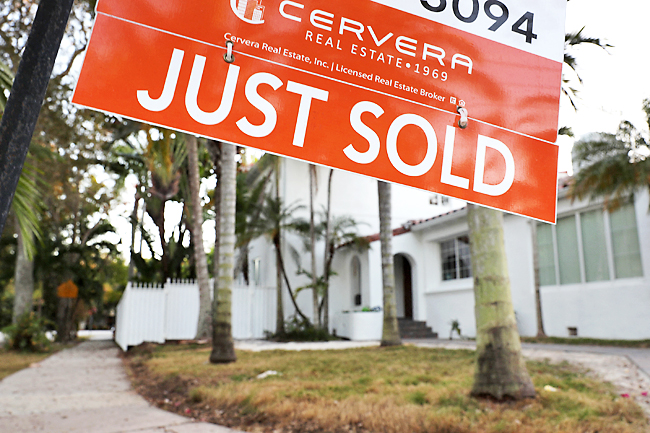 Even with strong buyer traffic “builders are still grappling with major supply chain issues and soaring materials costs, which are causing construction delays and preventing them from adding to the already very low inventory,” said chairman of the National Association of Home Builders (NAHB) Chuck Fowke.

Economist Mickey Levy of Berenberg Capital Markets pointed to the seven per cent year-over-year rise in construction costs which “contractors are readily passing on” to home purchasers.

But the median sales price dipped to USD330,800, its lowest since August 2020, reflecting a big jump in sales of more moderately priced homes.

Buyers have flooded into the market in the past year, taking advantage of low borrowing rates and higher savings in the bank, while some are opting to move out of congested areas to take advantage of the ability to work from home.

Chief economist Lawrence Yun of the National Association of Realtors, which produces the monthly data on existing home sales, noted that “buyers are eagerly signing contracts” even for not-yet-completed new houses.

In an e-mail to AFP, he said “it seems builders are focusing on starter homes in cheaper land areas as evidenced by no change in prices from a year ago compared to a 17 per cent gain on existing home prices.”

There were double-digit monthly sales gains in all regions except in the West, where sales plunged 30 per cent, and the pace for the prior two months were revised upwards, according to the report.

Though some homebuyers are priced out of the market, most economists expect demand to remain strong, which is a boost to the overall economy since homebuyers invest in other items like big-ticket appliances.