Jones, a serial provocateur who founded the far-right website InfoWars, has been ordered to pay nearly USD1.5 billion in damages for calling a 2012 mass shooting in an elementary school – which left 20 first graders and six adults dead – a “hoax”.

Defamation cases in Texas and Connecticut against Jones have spotlighted the challenge of curbing misinformation on the Internet, where false and inflammatory content often spreads faster, generates more engagement – and more revenue – than the truth.

“The modern Internet business model consists of building an audience and then monetising that audience, either through ads, merchandise sales, or direct donation,” cofounder of the nonprofit Global Disinformation Index Danny Rogers told AFP.

“Alex Jones perfected that model by peddling the most adversarial narratives in the form of virulent conspiracy theories and unbridled anger, building a receptive audience, and then soaking that audience for profit.”

Jones has amassed what experts call a fortune by successfully merging the conspiracy theories with merchandise and dietary supplements from his InfoWars store.

He has hawked male vitality supplements and testosterone boosters, while claiming the government was feminising men using chemical pollutants.

He accused the government of deliberately putting fluoride in drinking water, while his store peddled fluoride-free toothpaste. 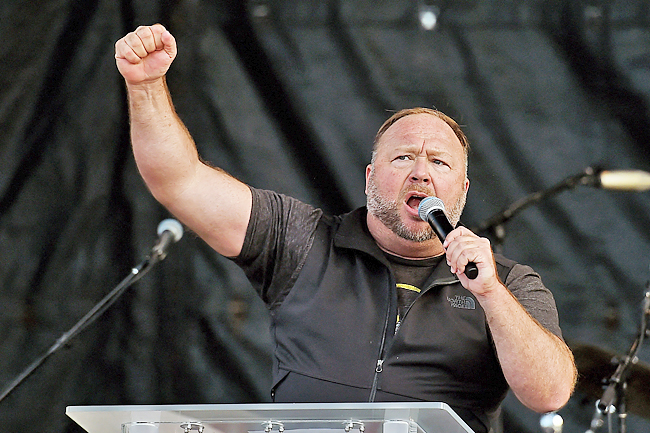 His audience, he claimed, can survive various doomsday scenarios with other products that his store can supply – storable food, body armour and components for homemade guns.

The extent of his wealth is opaque but a forensic economist testified during the Texas trial that the combined net worth of Jones and Free Speech Systems – the parent company of Infowars – likely fell between USD135 million and USD270 million.

But while bashing the trials as an assault on free speech, Jones has said he has little money to pay the damages and has repeatedly implored his audience for donations.

As he battled the defamation cases, an anonymous bitcoin donor sent Jones cryptocurrency worth USD8 million, the non-profit Southern Poverty Law Centre reported in May.

This week, Jones declared personal bankruptcy in his home state of Texas, saying his liabilities far exceeded his assets that were worth between USD1 million and USD10 million. InfoWars declared bankruptcy in April and Free Speech Systems filed for bankruptcy in July.

Last month, the Washington Post reported that Jones had transferred millions of dollars out of Free Speech Systems to firms that he or his family members controlled, citing financial records.

Families of the victims in the 2012 shooting in Sandy Hooks Elementary School in Newtown, Connecticut, have alleged that Jones was trying to hide his wealth to avoid paying the damages.

A jury in Connecticut awarded USD965 million in October to relatives of eight Sandy Hook victims and an FBI agent. The judge later tacked on an additional USD473 million in punitive damages.

In a separate trial, a jury in Texas ordered Jones to pay nearly USD50 million damages to a couple whose six-year-old son was killed in the shooting.

The families of the school shooting victims say they were harassed and threatened for years by Jones’ fans, with strangers showing up at their homes to confront them and hurling abuse online. Some even reported receiving rape and death threats.

“Their children got slaughtered – I saw it myself,” FBI agent Bill Aldenberg said in an emotionally charged testimony during the Connecticut trial in September. “And these people (Jones and company) made millions upon millions. They’ve destroyed everybody and they don’t care.”

InfoWars sales data presented during the Connecticut trial showed a major spike in revenue after Jones peddled a new lie about the school shooting.

On September 25, 2014, when he falsely claimed that an FBI report showed that “no one died in 2012 in Sandy Hook” his site’s daily revenue jumped to more than USD230,000, according to the data published by the Huffington Post.

On the previous day, before he peddled that claim, the site made only USD48,000.

That underscores, what experts said, is the financial incentive of content creators to push out conspiratorial material that has potential to go viral.

“The fundamental problem is larger than Jones and is really the business model itself and its toxic externalities,” said Rogers.

“This creates an entire world of Alex Jones polarising the global discourse, sowing fear and anger for clicks and cash. Until this changes, we’ll simply go from one Alex Jones to the next and little will change.”