The coalition said the patrol went ahead as planned yesterday. Washington said the deal reached with Ankara in August aims to address Turkey’s security concerns.

Ankara views Syrian Kurdish fighters as an extension of a Kurdish insurgency within Turkey and wants them away from the shared border, calling it a “safe zone.”

So far, fighters from the most prominent Syrian Kurdish group – the People’s Protection Units (YPG) – have moved away from border posts.

But Turkey remains unhappy with the size of the area. It also wants some of the 3.6 million Syrian refugees to return there. 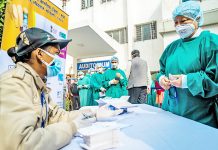