Tiafoe’s victory gave the Americans a 3-1 winning lead in the best-of-five Sydney City Final. The teams were scheduled to play a later mixed doubles match.

It means the US will be among four teams in the semifinal portion of the tournament that begins tomorrow at Sydney’s Ken Rosewall Arena.

In the afternoon session, Madison Keys moved the US ahead after rallying from a set down to defeat Katie Swan 2-6, 6-3, 6-4.

But world number 14 Cameron Norrie came back to post a 6-4, 5-7, 6-4 win against number nine Taylor Fritz to level the match.

“I think Madi really set the tone with her match,” Pegula said. 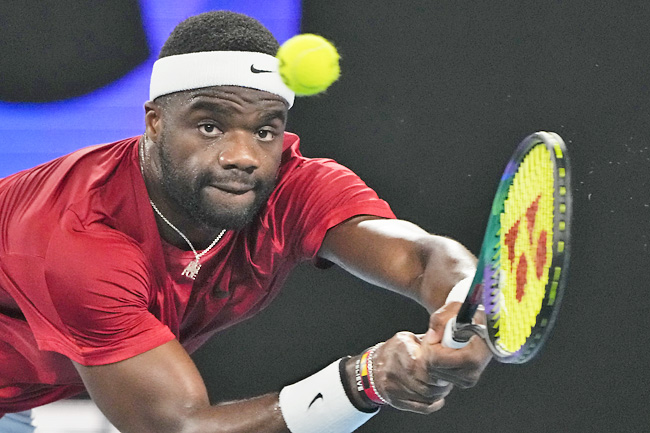 “I think I did everything really well today. I could feel it. Some days you come out firing and you feel really good. I was honestly trying to settle myself down because I was seeing the ball really well today.”

Matteo Berrettini beat Hubert Hurkacz 6-4, 3-6, 6-3 to give Italy a 2-1 lead over Poland in the Brisbane City Final before Poland won the fourth singles match to level it at 2-2 to send it to a deciding mixed doubles.

“I’m happy that even though Martina came back and played a really good second set I was able to finish it,” Swiatek, who was up 4-0 in the second set, said.

“I’ll be ready for mixed if it’s a tie and for sure I’ll be cheering (during the other singles matches) but yesterday I was so stressed (watching), I don’t know how you guys in the stands do it, it was so tough.”

And in the third city final in Perth, Western Australia, Croatia and Greece were level at 1-1 ahead of the two remaining singles matches and a scheduled mixed doubles.

The three city final winners and the next best-ranked team will play in Sydney from tomorrow to Sunday to determine the tournament champion.