Update your playlist with these great new audiobooks

A MOST REMARKABLE CREATURE: THE HIDDEN LIFE AND EPIC JOURNEY OF THE WORLD’S SMARTEST BIRDS OF PREY BY JONATHAN MEIBURG

The striated caracara, found chiefly in the Falklands and on the southeast coast of South America, is the subject of Meiburg’s extraordinary book. Known also as the Johnny rook, the bird belongs to the falcon family but has the intelligence of the corvids.

Like all very smart birds, it’s a mischief-maker and thief whose exploits Meiburg relates with great relish. (Its thievery bedeviled Charles Darwin and the crew of the Beagle.)

Meiburg touches on such weird animals as giant flesh-eating mice and covers the much neglected ornithologist and author of Green Mansions, William Henry Hudson.

Meiburg narrates the book himself – not always a good idea for an author, but as lead singer of the indie-rock band Shearwater, he is in command of his voice and is particularly appealing on the occasions when he relates what he believes the birds would be saying (if they spoke English). (Random House, Unabridged, 10 hours). 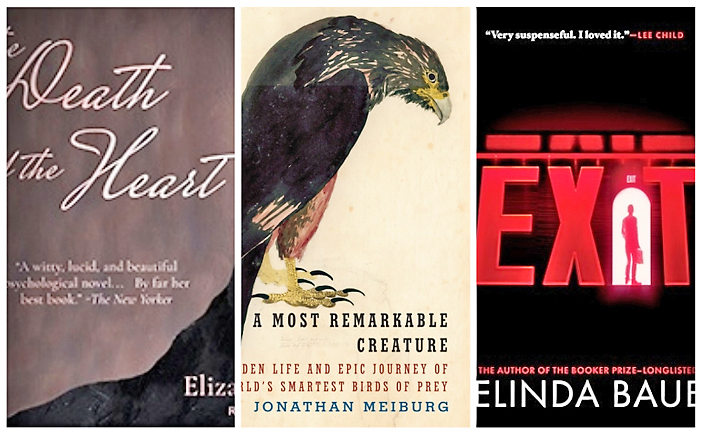 THE DEATH OF THE HEART BY ELIZABETH BOWEN

Published in 1938, Bowen’s brilliant, unsettling novel of innocence run amok is now available as an audiobook.

It’s the story of a 16-year-old orphan named Portia who has been thrust upon her much older half brother, Thomas, and his brittle, devious wife, Anna, a woman well provided with gentleman admirers. Among them is the sardonic confidant, St Quentin; the down-at-the heels military man, Major Brutt; and the impecunious, high-living chancer, Eddie.

Portia develops a passion for Eddie, whose dalliance with her she mistakes for love – with devastating consequences all around.

Pearl Hewitt brings a light, dainty-ish voice to the narration, giving a watchful naivete to Portia, well-bred peevishness to Anna, boundless energy to Eddie, and, coming down in pitch, a note of old-dufferdom to Major Brutt and below-stairs bluntness to Matchett, the housekeeper – the last two being the bereft, unsophisticated Portia’s only sympathetic friends. (Tantor, Unabridged, 13 hours)

Bauer’s darkly comic ninth novel is her best and, improbably, her sweetest, given its subject matter. Elderly widower Felix Pink is an “Exiteer”, a member of an anonymous group that pays house calls to help the terminally ill die by suicide. He and his young colleague, Amanda, arrive at the home of such a man, but, alas, the two mistakenly assist not him but another man into the hereafter. Oh, dear! But wait: Is this an accident or setup? Considerate, dutiful Felix tells Amanda to leave to escape blame and phones
the police.

A hapless but sympathetic cop, PC Calvin Bridge, is put on the case, and Bauer proceeds to spin out a terrific whodunit from the vantage points of both men.