The Ministry of Primary Resources and Tourism (MPRT) yesterday resumed the fourth series of its programmes for 15 Legislative Council (LegCo) members with visits to agricultural sites in the Brunei-Muara District.

The visits were aimed at sharing the latest developments and achievements in the agriculture, fisheries, forestry and tourism.

It also provided LegCo members with exposure to the techniques employed by entrepreneurs in increasing productivity and farm output; the involvement of locals as private owners or in joint-venture with foreign entrepreneurs; and employment opportunities for locals.

The company was offered a two-hectare site under a pilot project in September 2019 to cultivate high-value vegetable crops, such as tomatoes, lettuces and non-seasonal fruits, using a vertical farming and fertigation system in a protected home, using Internet of things (IoT) technology. 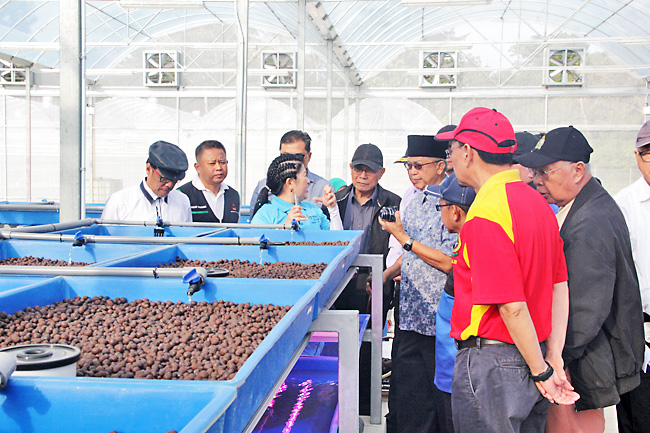 The delegation also had the opportunity to review the construction work and installation of sheltered house facilities that were near completion. Eight locals are employed by the company.

The delegation continued their visit to the farm owned by Hua Ho Agricultural Farm at KKP Si Bongkok in Kampong Parit, Masin, owned and managed by Lau How Teck.

Hua Ho Agricultural Farm has been offered additional sites under the expansion programme to cultivate integrated fruits and vegetables in contributing to the local crop industry. It has a total of 68 employees, 10 of whom are locals.

This project is implemented on a private finance initiative (PFI) with support from the MPRT through the Department of Agriculture and Agrifood.

The process of transforming and optimising chicken manure into organic fertiliser is expected to help improve soil fertility, increase crop yield and productivity and reduce the operating input cost.

The project is also an effort to overcome the issue of fly infestation in several villages in Mukim Pengkalan Batu which is said to be caused by poultry farming. It aims to reduce the government’s expenditure of providing assistance in the form of subsidised prices on agricultural goods such as fertilisers, pesticides and dolomite lime and to create employment opportunities.

The project will begin its operations in the first quarter of 2021 and will be the first locally-made organic fertiliser to be marketed domestically and targetted for the export market in the future.

A feedback session held at the MPRT building during which comments, views and suggestions for improvement were shared by the LegCo members.

The feedback will be used as a benchmark to enhance strategies and in efforts to diversify economic resources and increase growth.