Up close and personal with green energy

The tour, organised by the Ministry of Energy (ME) and supported by Mitsubishi Corporation Brunei, Brunei Shell Petroleum Sdn Bhd (BSP) and Green Brunei themed ‘Energy Transition: Towards a Sustainable Future’ was aimed at raising awareness and understanding of renewable energy technologies in the country.

The solar power generated from the TSB plant is equivalent to an annual electricity consumption of 200 households. The plant contributes about 0.14 per cent of the country’s total power generation capacity, and is operated and maintained by the Department of Electrical Services, ME.

The group also took a tour of the plant and took a closer look at a plug-in hybrid electric vehicle by Mitsubishi Corporation.

The contingent toured the exterior perimeter of BSP Flagship 3.3 Megawatt Solar Photovoltaic Plant in Seria which was officiated by His Royal Highness Prince Haji Al-Muhtadee Billah, the Crown Prince and Senior Minister at the Prime Minister’s Office, in April. The plant comprises some 7,000 solar panels to power 600 homes and offset the energy used at BSP Head Office. 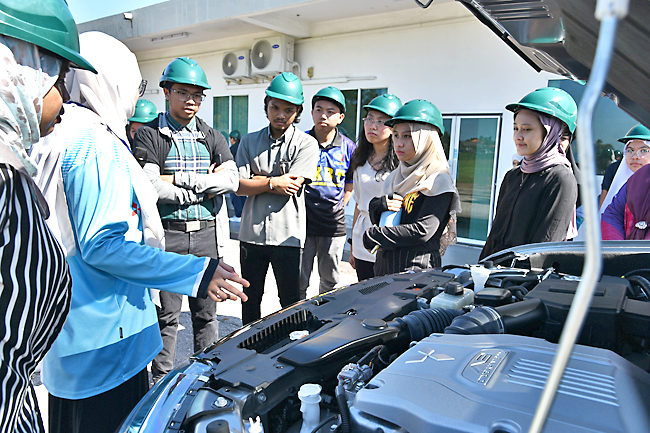