THE WASHINGTON POST – Many of us have been saying for years that science fiction has an important role to play in helping us understand the dangers of climate change. To survive what’s coming, we’ll need more than ingenuity – we’ll need imagination and a willingness to face scary developments with our eyes open.

So, it is welcome, thrilling even, to see so many new novels that include a thoughtful, matter-of-fact look at environmental devastation.

Instead of treating the subject as shocking, or as an occasion for Roland Emmerich-style disaster stories, these books accept the inevitability of climate disruption and challenge the reader to get used to the unthinkable.

Most of all, these books use a backdrop of climate disruption to tell cracking good stories in which you’ll want to get lost.

The Mountain in the Sea by Ray Nayler (MCD) has been described as an eco-dystopian thriller, but it’s something slower and more meditative. 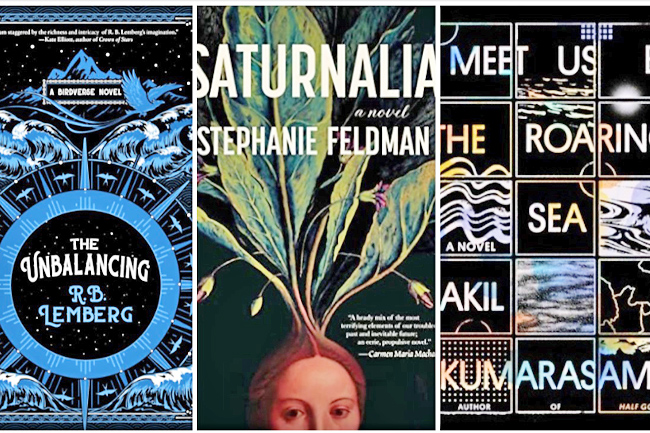 When the book opens, marine biologist Ha Nguyen has been invited to a secluded island called Con Dao to study a newly discovered octopus society that’s developed what appears to be its own writing, culture and even religion. But the creatures are threatened with extinction at the hands of humans.

Ha’s only companions are the world’s first self-aware android Evrim and a cyborg soldier.

Meanwhile, a man named Eiko is forced into slavery on a fishing vessel that trawls a near-lifeless ocean, and a hacker named Rustem is hired by a mysterious woman to do an impossible task.

Nayler’s poignant, mind-expanding debut is full of artificial intelligences (AIs), with various levels of mindfulness, alongside the mysterious octopus community.

The juxtaposition of these nonhuman minds raises big questions about the nature of consciousness.

In Saturnalia (Unnamed Press) Stephanie Feldman uses ecological collapse as a backdrop for a chilling tale of alchemy and corruption.

At the centre of the story is Nina, who dropped out of the elite Saturn Club and now has to sneak back inside to steal a very special box during the club’s debauched Saturnalia party.

Nina is forced not only to confront her former friends, but also to discover just how far some alchemists are willing to go to survive the apocalypse.

The constant awareness of a world on fire lends an extra layer of dread as a deadly monster stalks Nina, who finds something equally monstrous inside the box she’s trying to steal.

But even as Nina uncovers the depths to which some of her former friends are willing to stoop, she also rekindles one friendship that she realises she threw away too lightly.

Saturnalia is both dazzlingly inventive and full of spine-tingling menace.

If you want a post-climate change novel that goes all the way weird, look no further than Meet Us by The Roaring Sea (Farrar, Straus and Giroux), by Akil Kumarasamy.

The story is a kind of multilayered dream sequence that asks big questions about civilisation, memory and survival.

Ada is mourning the death of her mother while training an AI with an unsettling curiosity.

Other subplots involve self-driving cars, strange art projects and memory experiments. The specter of climate change is ever-present in Kumarasamy’s densely packed world, from the “carbon score” that governs everyone’s use of resources to the vivid descriptions of girls chewing a single peanut for 20 minutes during a famine.

Kumarasamy’s gorgeously written book captures the terror of living through a bewildering disruption.

The disaster in RB Lemberg’s The Unbalancing (Tachyon) is of a more mystical sort: A fallen star is sleeping under the ocean near the city-state of Gelle-Geu, tied to the dormant volcano on the nearby mountain – but now the star is becoming restless and the waters may soon claim the city and everyone in it.

An introvert poet named Erigra Lilun and an arrogant young “star-keeper” named Ranra are the only ones who can understand what’s going on. There’s so much to cherish in The Unbalancing, a stand-alone novel in Lemberg’s Birdverse series.

The relationship between Lilun and Ranra beautifully captures the spikiness and tenderness of a new connection that could turn into something beautiful.

The worldbuilding is full of deep lore, and Lemberg’s magic system is appropriately wild and poetic.

But most of all, the novel offers lessons in survival when complex, barely understood systems begin to fall apart.