THE WASHINGTON POST – A little brother falls down and starts crying, and his big sister laughs maniacally. A kindergartner roughly shoves a friend who reaches for a coveted toy.

An 11-year-old has a thoughtful conversation with his mom about bullying – and then makes fun of a classmate the very next day.

There are infinite variations to these scenarios, all of which prompt the same questions from many distressed or mortified parents: Is this normal? Am I raising a kind child?

Experts said these concerns have been raised more frequently in recent years, particularly as the volatility of our societal and political landscape has heightened a sense of urgency in many parents who want to raise a new generation of empathetic people.

But a lot of the warning signs that parents think they’re seeing aren’t warning signs at all, these experts say, and many behaviours that might seem unkind, indifferent or erratic are developmentally appropriate, part of the work of developing the very sense of self and empathy that parents want to cultivate.

We spoke with author Tovah Klein, a child development psychologist who directs the Barnard College Center for Toddler Development in New York, and Erin Walsh and her father, developmental psychologist David Walsh, co-founders of the Spark & Stitch Institute, which provides research-based resources to parents and educators. They offered an overview of what happens in the brains and lives of children as they grow from birth to the tween years, so that parents might be better able to understand how a capacity for empathy evolves, and to correctly interpret their children’s behaviour. 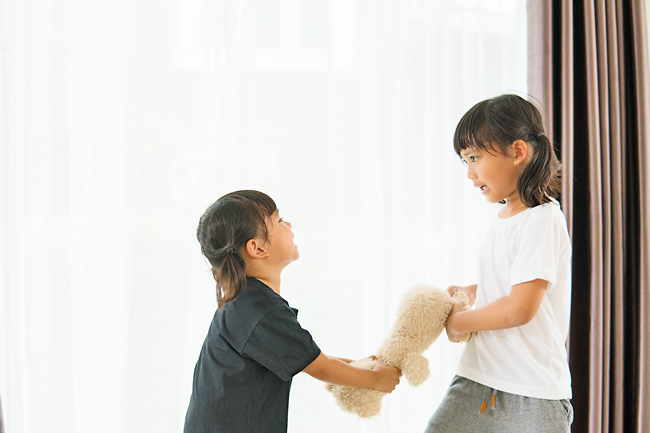 One of the earliest building blocks of empathy is evident even in the first 24 hours of life, said David Walsh: “Newborn infants in a nursery, for example, will show signs of distress when other babies are very distressed. Of course they have no cognitive ability to understand what’s going on, but this is evidence that the underlying wiring, the architecture of the brain, enables us from the very get-go to be able to respond emotionally.” David cited renowned psychologist Daniel Goleman, who drew on the work of psychologist Paul Ekman and identified three distinct components of empathy: Cognitive, emotional and compassionate. “The emotional component emerges first,” David said. “The capacity is there.”

The development that takes place between 18 and 24 months is fairly staggering, Erin Walsh said, as children begin to discern a difference between the idea of their own self and another human being. David Walsh explained this evolution by describing an experiment:

“Because when I’m 18 months old, if I like goldfish crackers, you like goldfish crackers. But if I do this same experiment with that same child at the age of 24 months, they’re much more likely to give me the broccoli because at that point, they realise that ‘what I like and what you like’ might be different. And that’s a very, very important developmental stage, when we’re talking about empathy – the realisation that we have different likes, we have different needs.”

But a two-year-old is still primarily interested in their own likes and needs, said Tovah Klein. “What emerges in this time is an awareness of ‘Oh, I am my own person! I have ideas, I have thoughts, I have needs!’ They are still getting to know themselves. It’s not that they’re mean, even if we don’t like the behaviour, it’s that they’re focused on What do I need? And at this age, that’s appropriate.”

At this age, she said “they’re not good at waiting, they’re not good at recognising other people’s needs, too. If we let them be self-focussed – it’s not selfish, it’s self-focussed – that helps them get to know themselves, even if it’s embarrassing to adults”. If a two-year-old snatches a toy car from a playmate, Klein said, it isn’t intended as cruelty; it’s simply them responding to the impulse that they need that car. It takes a little longer, she says, for a child to realise that their playmate might feel that same way, too.

“At this age, kids are starting to move into a space of ‘I have my needs, but I want to play with you, so we’re going to have to work this out, and sometimes it’s going to go my way and sometimes it’s not,’” Klein said. But this realisation is messy, and that’s where parents often get concerned.

“None of us want to see our child being the selfish one or mean on the playground – even if that’s part of normal child play. This is what we call theory of mind,” she said – the growing cognitive awareness that other people have their own thoughts and ideas and will behave accordingly.

A three- or four-year-old might be starting to grasp this, but they are also still very tethered to the sense of their own immediate needs.

“Socialisation is a very slow and long road. And they keep getting better in time if we don’t shame them, if we don’t punish them, we don’t panic every time they do something that to an adult seems not nice,” Klein said.

“Kids do all kinds of bizarre things. They hit each other, they take things from each other, they say ‘I don’t want to play with you.’ It’s slower than any of us want, and it’s embarrassing,” she said. But it’s also normal.

In the later preschool years, Erin Walsh said, the cognitive components of empathy start to become stronger, and a child’s executive function skills are starting to mature: “We can see some pretty extraordinary abilities for children to take the perspective of others during this time,” she said.

“But this age group is also really into fairness, they can be really black-and-white, and sometimes there are competing developmental tasks happening.” This might present as ‘selfish behaviour’ when it really isn’t, she explains. “A moral awareness of fairness is really going to help with our empathetic responses later in life, but when you’re four and you’re like ‘I didn’t get the same size cracker, so I don’t care that you’re crying’ – that’s the kind of thing for parents to take into account.”

This is when the theory of mind begins to develop more strongly, said David Walsh, and the cognitive element of empathy begins to evolve to keep pace with the emotional component, which means that children are far more able to understand what another person might be experiencing.

This can sometimes be really striking for parents and educators, Erin Walsh added; kids at age six or seven might be able to think meaningfully about more complex moral issues, but they’re still learning to regulate their emotions and impulses. “This can seem like a mismatch,” Erin said. “You can have an amazing conversation about racism with a seven-year-old and then they can walk over and pile drive a sibling, and that can leave parents thinking, ‘But they know better!’

“But a lot of it is not about smarts. We can gain the cognitive skills to have quite sophisticated moral conversations, but our ability to always put that into practice is not about smarts, it’s about impulse control and emotional regulation. And those skills are still very much under construction and very much a work in progress at this age.”

“I think the way to envision what happens as you go through those elementary school years is they keep building on these abilities – just as they’re advancing in terms of their math skills, they’re hopefully advancing in terms of their ability to take another person’s perspective, identify with another person’s feelings, they get better able to do it effectively,” David Walsh said.

Around this age is also when the third element of empathy – compassion – can become more consistently evident, he noted.

But not always, and he still emphasises to parents: “There are so many individual factors that can come into play in a particular instance, so what you want to do is look at the overall trajectory: Do our kids seem to be developing in the general direction where they’re able to understand another’s perspective? As parents, we need to be looking at the forest, not the individual trees.”

When it comes to the development of emotional regulation skills, “the next major construction phase happens just as kids hit puberty”, Erin Walsh said. “In those tween years, the part of the brain that helps them think ahead, filter out distractions, consider consequences … is under construction, and at the same time, the emotional pedal is to the floor.”

Kids this age are capable of being deeply attuned to others, but when they’re in a position where someone’s feelings are hurt or a peer is experiencing great distress, “that’s where we’re more likely to see an accelerated emotional response, because the part of the brain that helps manage that is still a work in progress”. Still, it’s wrong to say that tweens and teens are generally self-centred, she said, even if their behaviour might seem that way at times.

“There is incredible reconstruction happening in their brain and that sometimes gives them real cognitive superpowers, and at other times it just makes it feel hugely overwhelming to be a tween,” she said. “They might laugh, or minimise something, or pretend they don’t care because they’re actually scared of how much they care.”

And a child at home might be very different from the one who interacts with friends, classmates, teachers or coaches. David Walsh still remembers a moment from his years as a high school teacher and counsellor, when he asked a group of kids: If someone gave them half a million dollars, what would they do with it?

“This one boy thought about it, and he said, ‘I would buy my parents a bigger house, because they work so hard for us,” David said. He ran into the boy’s mother the next day and told her, “and she broke into tears”. She was astonished, he said, because her son was constantly arguing with her at home. “He really did appreciate and understand what his parents were going through,” David said. “He would never tell them. But he told me.”