ANN/THE STRAITS TIMES – United Malays National Organisation (UMNO) delegates at its annual assembly have passed a resolution to no-contest rules for the party’s top two positions at its upcoming internal election which must be held before May 19.

The resolution was passed by the majority of the 5,000-plus delegates at its annual meeting at party headquarters. The annual meeting of Malaysia’s longest ruling party is closely watched.

The no-contest resolution means that UMNO President Zahid Hamidi, and Deputy President Mohamad Hasan, cannot be challenged at the May polls.

Zahid is also Deputy Prime Minister in the Anwar Ibrahim administration and Mohamad the Defence Minister.

Other posts – including for the three vice-presidents and the wing chiefs – are still open for contests. 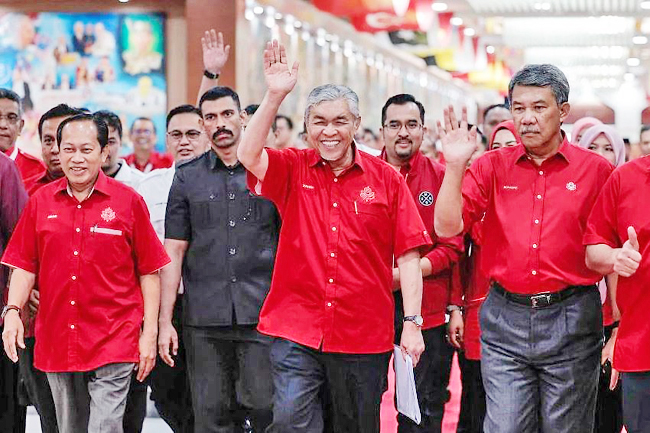 Terengganu UMNO’s state liaison chief Ahmad Said said yesterday that over 90 per cent of the delegates supported the no-contest resolution, while less than 10 per cent rejected it. “The no-contest motion will allow UMNO to consolidate its strength ahead of the six state elections held in 2023.

“We do not want UMNO to be in disarray due to an intense internal poll,” he told reporters. Six Malaysian states will hold state-assembly polls this year: Kelantan, Terengganu and Kedah helmed by opposition Perikatan Nasional (PN) alliance; and Penang, Selangor and Negeri Sembilan which are controlled by the ruling Pakatan Harapan (PH) pact.

UMNO Information Chief Isham Jalil also confirmed the passing of the resolution in a Facebook post, saying it received support from the majority of the delegates.

UMNO last approved a no-contest for the two top positions at the 2017 assembly, protecting its then-president Najib Razak and incoming deputy president Zahid from being challenged.