SHIJIAZHUANG (XINHUA) – On a quiet and sunny afternoon, beautiful music drifts from a cafe in the rural area of north China’s Hebei Province.

It is the Ukrainian violinist Igor Kyrychenko that is playing with his two compatriots. The 59-year-old musician has lived in the village of Zhouwo in Wuqiang County for three years, giving violin lessons at a local art school.

“I can tell that people here are passionate about music. People always come near us while we are playing,” he said.

Wuqiang used to be an impoverished county. In Zhouwo, with a population of about 900, villagers mainly toiled in the fields or worked in cities for a living. In 2012, relying on the advantages of the local musical instrument assembly industry, Wuqiang County turned Zhouwo Village into a music town, integrating the functions of accommodation, tourism, shopping and entertainment.

“I have been in big cities like Beijing, but I fell in love with Zhouwo the first time I came here because of the cosy environment, musical atmosphere and the hospitable villagers,” said the Ukrainian. 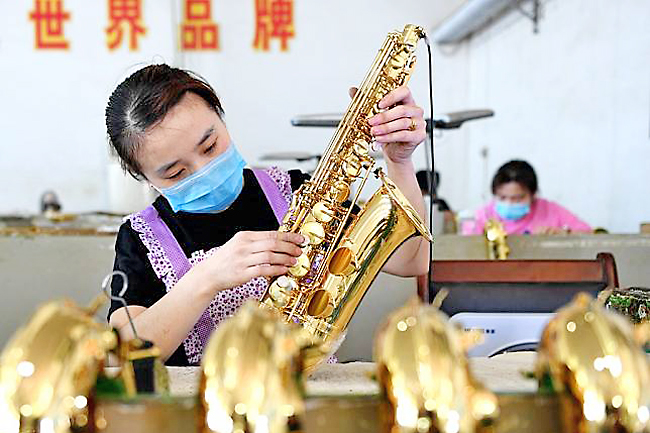 Despite the language barriers, Kyrychenko and his students can communicate through eye contact, gestures and – more importantly – music. “I’m glad to see so many talented children here. Training them here makes me proud,” he said. The number of students in his class has increased from four in 2018 to over 20 now.

During the COVID-19 epidemic in 2020, Kyrychenko stayed at home like most Chinese people in Wuqiang. He was impressed by the effective measures adopted by the Chinese government to curb the spread of the virus.

“I saw the anti-virus actions taken in an orderly manner. The nucleic acid testing was very efficient. It’s very impressive,” he said.

Now that the infections have waned, both production and life have returned to normal in Wuqiang. Guo Yuguan, a saxophone lover, and her fellow villagers have resumed regular practice sessions.

Guo said that, since they no longer have to worry about their income, more people are playing instruments in their leisure time in pursuit of a better spiritual life.

Music has also brought people economic benefits. In the music town, Guo sells souvenirs to tourists, and her daughter-in-law works in a musical instrument factory.

“I have just spent more than CNY1,000 (USD155) on new clothes for my husband without hesitation,” she said with a smile.

Thanks to the musical instrument industry and tourism, the per capita annual income of Zhouwo has risen to about CN25,000.

In 2018, when Kyrychenko settled in Wuqiang, the county was removed from the poverty list.

By the end of 2020, the final 98.99 million impoverished rural residents living under the current poverty line in China were all lifted out of poverty. Over the next five years, the country will continue to prioritise the development of agriculture and the rural area to promote rural vitalisation.

Kyrychenko feels glad to have witnessed the great changes and development in Wuqiang over the past years.