First Secretary of State and Secretary of State for Foreign Affairs, Commonwealth and Development Affairs of the United Kingdom (UK) Dominic Raab is keen on exploring new opportunities with Brunei to enhance relations between the two countries, including trade, security cooperation, modern sustainable economy, threats to cyber and the roles in the ‘Indo-pacific Tilt’.

“UK-Brunei have a rich history together. We look forward to building an even stronger relationship for the future,” he said in an exclusive interview with the Weekend Bulletin hosted by the British High Commissioner to Brunei Darussalam John Virgoe on Thursday.

He said “the dynamics of our people, the blistering trade, security cooperation with the garrison and new threats like cyber” are the areas being explored to see “how we can do more to support each other. We have forged bilateral cooperation for development in various fields. The visit will explore where we can do more. We are optimistic of making good progress”, he added.

Raab, who visited Indonesia on Wednesday before arriving in Brunei for the first time, received an audience with His Majesty Sultan Haji Hassanal Bolkiah Mu’izzaddin Waddaulah ibni Al-Marhum Sultan Haji Omar ‘Ali Saifuddien Sa’adul Khairi Waddien, Sultan and Yang Di-Pertuan of Brunei Darussalam on Thursday. He also held meetings with his Bruneian counterparts from the Ministry of Foreign Affairs along with the Ministry of Finance and Economy.

The British Foreign Secretary who looks forward to Brunei hosting the ASEAN Summit later this year, expressed confidence that Brunei can forge a dynamic partnership in the region to advocate climate commitments. 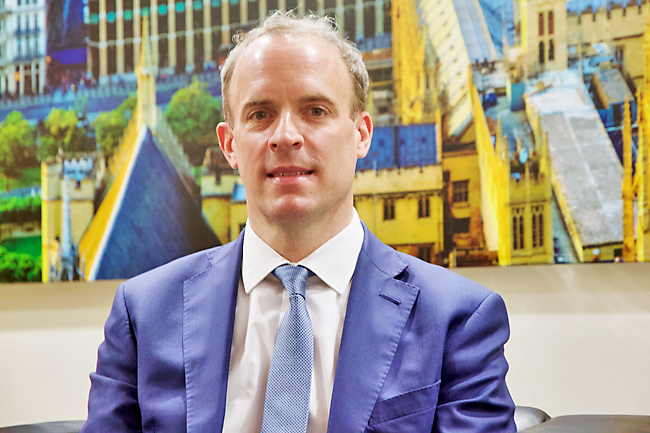 He described Brunei’s Chairmanship for ASEAN as a “force-multiplier” given the Sultanate’s exceptional progress on renewable technologies — “something that the UK is trying to do”.

Raab’s visit is also timely with the UK’s bid as ASEAN’s Dialogue Partners, considering the country’s existing substantive linkages and prospective contributions to ASEAN Community-building. On hosting the 26th United Nations Climate Change Conference of the Parties (COP26) this year by the UK, he said that COVID-19 hasn’t stopped the climate emergency conference.

“As Chair, UK can encourage others to take ever more ambitious action to the Paris Agreement on climate change,” he said. The foreign secretary has actively expressed his commitment to supporting international students, ensuring that they will not be forgotten as the vaccine is being administered.

He reaffirmed that the COVID-19 treatment, including the vaccines, will be provided to all students according to procedures. “Bruneian students should be able to access these vaccinations, just as they are able to access healthcare,” he explained.

Raab’s visit signals Britain’s keenness to bolster relations with countries in the region “because the Indo-Pacific tilt is vital for the UK to grasp the economic opportunities and rise to the new challenges ahead”.