DUBAI(AFP) – The head of the United Arab Emirates'(UAE) national oil company was named yesterday as president of this year’s COP28 climate talks.

“I sincerely believe that climate action today is an immense economic opportunity for investment in sustainable growth,” he was quoted as saying, promising a “pragmatic” approach.

Jaber, the UAE’s Minister of Industry, is also the Gulf state’s special envoy for climate change and has taken part in more than 10 COP meetings.

He is CEO of Masdar, the UAE’s renewable energy company, and has “played a key role in shaping the country’s clean energy path”, the statement said.

COP27, held in Egypt in November, concluded with the adoption of a hotly contested text on aid to poor countries affected by climate change, but failed to set new ambitions for lowering greenhouse gas (GHG) emissions. 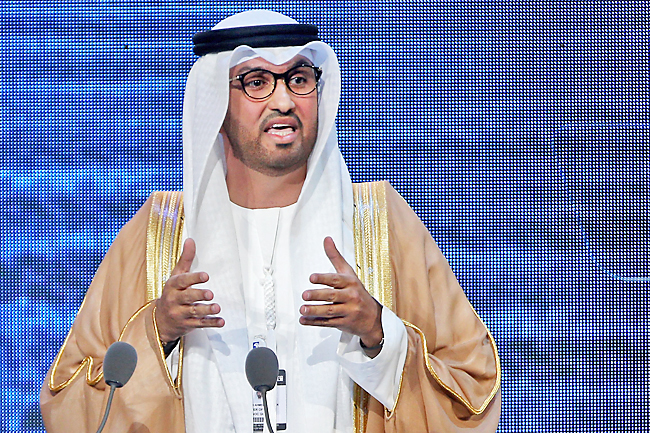 The UAE, one of the world’s biggest crude producers, will host the next edition in Dubai in November and December. It had the largest contingent of oil and gas lobbyists at last year’s talks.

The Gulf monarchy argues that oil remains indispensable to the global economy and is pushing the merits of carbon capture – removing carbon dioxide, the main GHG, as fuel is burned or from the air.

“Limiting global warming to 1.5C will require significant reductions in emissions, a pragmatic, practical and realistic approach to the energy transition and more help for emerging economies,” the UAE’s statement said, referring to the goal set at previous COP summits.

The UAE is one of the countries at the sharp end of climate change as it lies in one of the world’s hottest regions, with summer temperatures nudging 50 degrees Celsius.

The UAE has announced ambitious environmental initiatives, including plans for 20 gigawatts of installed solar capacity by 2030 and a fully operational nuclear power station by 2024.

But the Gulf state also forecasts that the oil and gas industry would need to invest more than USD600 billion every year until 2030 to keep up with expected demand.

Former UN climate chief Yvo de Boer offered support for the UAE and Jaber, saying his work in “green growth strategy” and renewable energy give him the “understanding, experience and responsibility” to make COP28 a success.

With its high use of air-conditioning and desalinated water, and ubiquitous SUVs plying 10-lane highways, the UAE was the world’s fourth biggest polluter per capita in 2019, according to the World Bank.

It is aiming to develop enough renewable energy to cover half of its needs by 2050, when it is targetting domestic carbon neutrality – which excludes emissions from its exported oil.