KUALA LUMPUR (BERNAMA) – Two vehicles at a parking lot near the Sri Putramas Condominiums in Malaysia were set on fire early yesterday in what is believed to be arson, according to the police.

“Several residents of the condominiums called the police at 4.38am. The police contacted the fire and rescue service to help extinguish the fire,” he told Bernama when contacted.

The fire had destroyed about 50 per cent of the vehicles, he said.

Shanmugamoorthy said the registration numbers of the vehicles could not be ascertained and their owners have yet to lodge police reports.

He also said that there were no closed circuit television cameras at the spot. 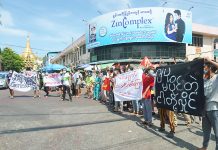 Man accused of killing Thai wife prosecuted for abuse in US