FREETOWN (AFP) – Two police officers were killed on Wednesday in Sierra Leone after a protest against “economic hardship” descended into clashes between security forces and youth demanding the president resign, the police said.

“Two police officers, a male and female, were mobbed to death by protesters at the east end of Freetown this morning,” police spokesman Brima Kamara told AFP.

Dozens of protestors had been arrested, police said. A health worker at a hospital in Freetown said dozens of people had been injured.

Protesters were heard chanting “Bio must go”, referring to President Julius Maada Bio, who is currently in the United Kingdom on a private visit. 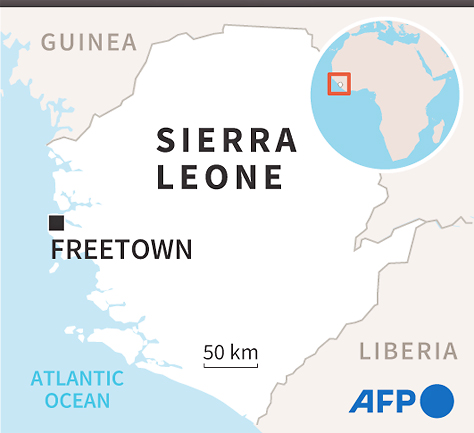 The Internet was temporarily blocked in Freetown on Wednesday afternoon, according to NetBlocks, a web monitoring group.

Demonstrations were also held in the city of Makeni and the town of Magburuka in the country’s northern province.

The Grassroots Women of Sierra Leone, a group of market traders, had called a “peaceful assembly” to “draw attention to the economic hardship and many issues that affect the women of Sierra Leone”, according to a letter to the inspector general of the police seen by AFP.

In a statement, the national security coordinator denied that any organisation had requested permission to demonstrate.

On Tuesday, the government said that it had directed the military to assist police in handling the “potentially volatile security situation”.

The risk of confrontation, it said, was stoked by “repeated social media incitements of the gullible population to embark on a countrywide violent demonstrations (sic) with the aim of subverting the peace and stability of the state”.

Women who had gathered in the city centre on Wednesday, holding placards, later fled the scene as tensions rose.

Security forces dispersed the demonstrators, who fled to the east of the city.

The Economic Community of West African States (ECOWAS) regional bloc said in a statement that it “strongly condemns the violence”.

It called “for the perpetrators of the violence to be identified and brought to justice”.