Four firefighters from the Sungai Liang Fire Station led by DSO Haslan bin Osman were dispatched at 11.37am in response to an emergency call, the Fire and Rescue Department (FRD) said.

An investigation of the two-storey house revealed that the explosion was caused by a gas leakage from an LPG gas pipe, leading to damages to the house and nearby vehicles.

The two residents, who sustained light injuries, were treated by on-site paramedics. 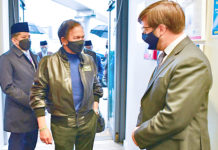