THE WASHINGTON POST – The best historical murder mysteries combine the compelling momentum of detective fiction with a plunge into the past that’s both enlightening and exciting. Two recent offerings transport readers into fascinating settings – and the first, in particular, features appealing characters, who are the true draw of any well-told tale.

Ever since Arthur Conan Doyle situated his sleuth Sherlock Holmes at 221B Baker Street, Victorian London has been the ur-setting for detective stories. The Irish novelist Paraic O’Donnell starts off The House on Vesper Sands in winter 1893, re-creating a foggy metropolis of dark menace and eerie beauty, and populated by a properly Dickensian cast. Gideon Bliss, a sheltered Cambridge undergraduate comes to the capital at the request of his uncle. When Gideon cannot find his relative, a clergyman, he ends up joining forces with Inspector Cutter of Scotland Yard in the search.

The central mystery concerns the fate of several young women of slender means, including a seamstress, who – visiting a mansion in the opening chapter – is shown to be in great pain from words she sewed into her own skin, and later leaps to her death out an attic window.

Another of these young women is pretty Angie Tatton, whom Gideon met and fell in love with when she worked in his uncle’s house. He discovers her laid out on the altar of a creepy church, wearing nightclothes and muttering incomprehensibly about “keeping the brightness hidden.” Gideon is then rendered unconscious by an unseen hand, and when he wakes again, Angie has disappeared.

Octavia Hillingdon, a society reporter for a London broadsheet, eager to graduate to the news pages, has meanwhile begun researching rumours about disappearing girls and the diabolical ‘Spiriters’ who steal their souls, and in the process she encounters Gideon and the inspector, where at an isolated villa on the Kentish coast, they all witness the climax of the story. 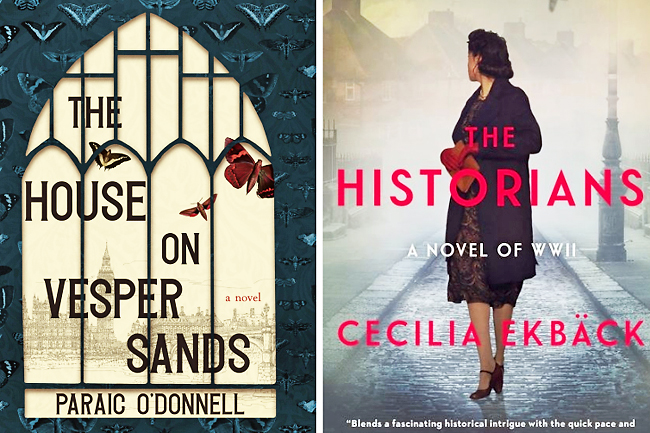 Vivid atmospherics and frequently comedic dialogue animate this highly polished novel. Inspector Cutter comments to his young protege at one point: “There is not much, Bliss, that you do not know how to say. It is more in the shutting off of the valve that you are inclined to struggle.”

Readers may be inclined to struggle with keeping track of the tale’s various strands, and the occult aspect at the heart of the mystery won’t be to everyone’s taste, but O’Donnell’s rendering of the past is faithful not only to how people ate, spoke and dressed in 1893, but also to how they thought. Many Victorians, living in an era of scientific and technological progress, felt an opposite pull – captivated by the supernatural, by ghost stories, by spooky phenomenon. The House at Vesper Sands summons up that spirit, beckoning it from a long dead world and into our own.

The publishing world’s insatiable appetite for historical fiction set during World War II shows no sign of abating. In The Historians, by Cecilia Ekback, the action takes place in neutral Sweden and touches upon little-known aspects of Swedish history – including an obsession with racial purity, and discrimination against the non-Nordic, indigenous Sami population of the country’s northern reaches.

By 1943, when the book opens, Nazi Germany is pressuring the Swedes for more iron. Laura Dahlgren, who works in the trade ministry, is horrified to discover the body of a young woman, a former classmate from her university, tortured and killed. As she investigates how the victim’s history thesis could be the key to uncovering her murderer, two parallel narratives develop, one concerning the suicide of an archivist and the other the disappearance of Sami workers near the Blackasen Mountain mine.

The story is told from multiple perspectives, and gradually zeros in on a conspiracy that explains all the events. The reader must endure a slow start as various plotlines are established, but the pace quickens at the halfway mark. Ekback excels at presenting red herrings, and the plot zigzags in intriguing ways. The novel also examines the pervasiveness of racial stereotyping and the shifting allegiances in wartime Sweden, where plenty of people sympathized with Adolf Hitler’s Germany.

Ekback, herself Swedish-born, provides valuable historical context in an afterword, which some readers may want to read first, for it contains no spoilers. But it does reveal the bold liberties she took with the facts. Having uncovered racist thinking in her native land, Ekback uses The Historians to suggest the evil actions those odious ideas could have led to.

Every author of fiction set in the past has to gauge how tolerant readers will be with pure invention, and mysteries are imaginative confections as a rule. But because Ekback’s book has within its scope the politics of a particular moment – Sweden on the tightrope of neutrality in 1943 – the demand to hew close to the record was perhaps higher than she reckoned. Though the overly speculative nature of the story is a weakness, its construction and dramatic denouncement are quite satisfying, and this what-if story illuminates a little-explored corner of wartime Europe.