CENTRAL FALLS, RHODE ISLAND (AP) — Mario Valdez, his wife and their 18-year-old son were fully vaccinated for COVID-19 this month as part of a special effort to inoculate every resident of Central Falls, the Rhode Island community hit hardest by the pandemic.

“I feel happy,” the 62-year-old school bus driver said shortly after receiving his second and final dose. “Too many people here have COVID. It’s better to be safe.”

Roughly 80 kilometres across the state line is Chelsea, a Massachusetts city that was an early epicentre of the virus. Like Central Falls, it’s a tiny former industrial city that is overwhelmingly Latino.

Residents of both cities live in dense rows of triple-decker homes and apartment complexes, providing the workforce for their respective state capitals of Providence and Boston.

But the two cities’ fortunes could not be more different during the COVID-19 vaccine rollout. Chelsea high school sophomore Mannix Resto fears that Massachusetts’ slow pace of vaccinations will continue to prevent students from attending classes in person. 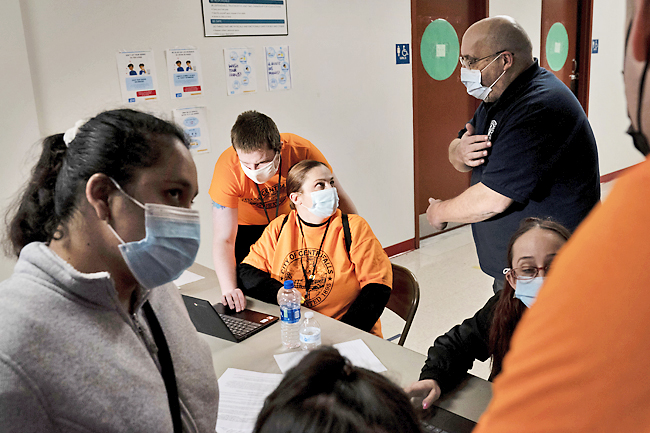 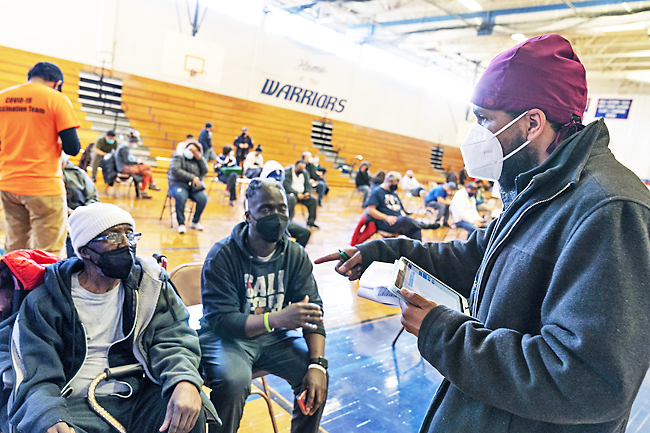 The 15-year-old saids no one in his family has been vaccinated yet as the state focuses on front-line workers and residents who are older or have serious health conditions.

“I just want to know how much longer it’s going to last,” Resto said earlier this month while walking with a friend on Broadway, Chelsea’s busy main street. “It’s been a year already. We can’t keep living like this.”

Rhode Island began offering vaccinations to elderly Central Falls residents in late December and gradually expanded it so that anyone 18 or older who lives or works in the city is now eligible.

Nearly a third of adults in the city have received at least one dose of vaccine and about 16 per cent are fully vaccinated, according to state data. Health officials said the city of about 20,000 has seen a marked drop in COVID-19 cases as a result.

In Massachusetts, meanwhile, public health experts, civil rights groups and immigrant activists have been complaining for months that the state isn’t doing nearly enough to make sure Black and Latino residents are inoculated.

Meanwhile, Black and Latino residents are dying from the virus at three times the rate of whites in the state by some measures, and Chelsea remains one of the state’s hardest hit communities, with a COVID-19 positivity rate higher than the state’s.

“Chelsea has demonstrated over and over again that we support the economy. But we’ve been neglected for decades.”

Some states and counties have taken different approaches to ensuring vaccines are fairly distributed to communities of colour, but too many government leaders are reluctant to fully embrace the strategies as a necessity, saids, Dean of the Public Health Programme at the University of California, Dr Bernadette Boden-Albala

Until hard-hit communities are properly addressed, their residents will continue to spread the infection, ensuring the virus persists, she and other experts said.

“If the pandemic is a fire, the vaccination is the water,” Boden-Albala said. “You need to bring it to where the fire is burning the most, or you’ll never put it out.”

To be sure, Rhode Island and Massachusetts leaders have both faced withering criticism about the slow pace of vaccinations overall in their states. And the vaccine rollout hasn’t been all smooth sailing in Central Falls.

Mayor Maria Rivera, who took office in January, saids the state hasn’t provided additional resources or manpower for the rollout in Central Falls, which went bankrupt during the 2008 recession and emerged from state receivership in 2013.

The city’s main vaccination site, held every Saturday at the high school gymnasium, is an almost entirely volunteer operation.

Rivera saids city volunteers have been going door-to-door registering residents unwilling or unable to sign up for appointments online or by phone. They’ve also had to reassure residents living in the country illegally that they won’t be targetted by immigrant enforcement officials for seeking a shot, she saids.

“We just want them to show up,” Rivera saids. “We’re not going to turn anyone away.”

According to data provided by Rivera’s office this week, nearly 40per cent of doses have gone to Latinos and 27per cent to whites at three of the city’s main vaccination sites. Another 23per cent of vaccine recipients didn’t provide their race or ethnicity, and demographic data wasn’t available for other vaccine locations, the office said.

Across the state line in Chelsea, Vega’s organisation has partnered with a community health centre to launch a public vaccination site at its office on Broadway.

Vega saids bringing the site to the city was a hard-fought achievement by local advocates. The only mass vaccination site the state has so far opened in a Boston-area community of colour is about 16 kilometres from Chelsea, in Boston’s historically Black Roxbury neighbourhood, she and other advocates said.

And unlike vaccination sites in Central Falls, Chelsea’s sites are limited by Massachusetts’ eligibility rules, which only last week expanded to persons 65 or older, as well as people with two or more serious medical conditions.

The clinic has vaccinated more than 900 since opening on February 4, but the numbers are expected to rise this week as more people in the state now qualify, according to the East Boston Neighbourhood Health Centre, which operates the site.

Earlier this month, David Evans was surprised to find he had the clinic mostly to himself as he received his first dose. “That went pretty smoothly,” the 82-year-old Chelsea resident said. “I was preparing for this to be an ordeal after hearing about places where people couldn’t get appointments or they didn’t have shots.”

Out on Broadway that same day, the opening of the clinic was largely met with shrugs and indifference, suggesting officials have a long road ahead to win over skeptical residents.

“If the government told me I must take the vaccine, then I’d take it. But at the moment, I don’t want it,” said Cesar Osorio, a 30-year-old construction worker washing his clothes at a self-service laundry down the block. “Spanish people, we have our own medicines. We don’t want vaccines.”

Rivera is already dreaming of the return of beloved community events, like the city’s summertime salsa nights.

She saids the city is on pace to inoculate most residents by the summer. “I’m looking forward to the day we don’t have to wear face masks,” Rivera said while volunteering recently at the high school site.

Resident Mario Valdez has equally modest hopes. Now that he and his family are fully inoculated, they’re making plans to fly to his native Guatemala in July, a trip they make nearly every year to visit relatives. “It’s going to be great,” he said.