ROME (AFP) – Two children died and at least five women were hurt when fire broke out on a vessel carrying migrants from North Africa towards the Italian island of Lampedusa, authorities said.

Migrants make in the dangerous Mediterranean crossing in leaky, overcrowded boats as they flee war and poverty in the Middle East, Asia and Africa.

“In agreement with the Maltese authorities a coast guard patrol boat was dispatched from Lampedusa to the area and picked up 38 migrants, including the bodies of two minors,” a statement from the island authorities read.

According to Italian media, the two dead children whose bodies had suffered burns were aged one and two. A pregnant woman aged 25, believed to be the mother of one of the victims, was reportedly taken to hospital and another woman was reported as missing.

An explosion apparently occurred on board the migrants’ craft, which could have been down to either a gas canister or fuel igniting, the coast guard said.

The Sicilian public prosecutor in the town of Agrigente opened an investigation as the survivors were transferred to Lampedusa, a regular arrival point for migrants crossing from Tunisia or Libya. The island’s mayor Filippo Mannino urged European Union (EU) Chief Ursula von der Leyen to come to see the aftermath for herself.

“I have been mayor for barely 100 days and have already counted five deaths,” he said.

More than 76,000 people have reached Italy so far this year, compared with 50,000 in the same period last year. So far this year, 1,269 migrants have disappeared during attempts to cross the Mediterranean, which the International Organization for Migration said is the world’s most dangerous route for would-be migrants. 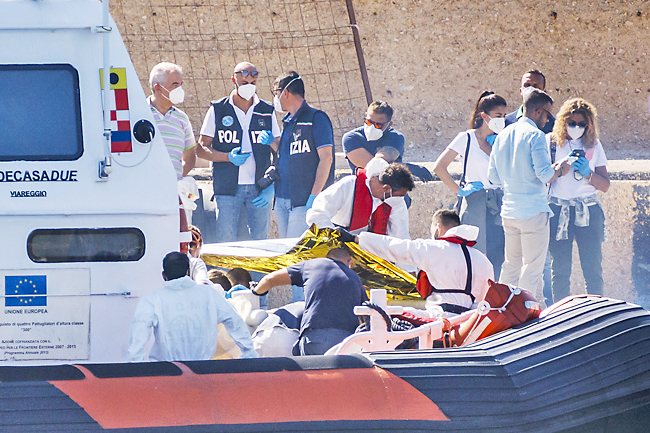