THE WASHINGTON POST – Now that The Lord of the Rings: The Rings of Power has finished its first season, what are Tolkien fans to do as we await the next installment? Never fear: The Tolkien literary estate seems to have an enchanted carpetbag, with wonders that emerge long after it has seemingly been emptied.

This month, it released The Fall of Númenor, a trove of source material about one of Middle-earth’s most intriguing and central backstories. The book is beautifully illustrated by Alan Lee and nimbly edited by Brian Sibley, who has toiled on a dozen previous Tolkien projects. Compiled from previously published material, the book is a handy addendum for any Tolkien completist and also a neat introduction for those whose sole knowledge of the doomed island comes from The Rings of Power.

Númenor was Tolkien’s attempt to grapple with what he called his “Atlantis complex” or “Atlantis-haunting”. In a 1964 letter, he wrote: “This legend or myth or dim memory of some ancient history has always troubled me. In sleep I had the dreadful dream of the ineluctable Wave, either coming up out of a quiet sea, or coming in towering over the green islands. It still occurs occasionally, though now exorcised by writing about it.” Indeed, hints of Númenor’s cataclysmic history appear in The Lord of the Rings, with lengthier accounts recorded elsewhere in the vast Tolkien Legendarium. In a nutshell:

At the end of the First Age of Middle-earth, the evil Morgoth/Melkor is defeated by an alliance of Elves and Men. The Valar, “Guardians of the World”, are directed by Iluvatar the All-Powerful to reward these Men with their own island haven, a place “removed from the dangers of Middle-earth.” The sole hitch is the “Ban of the Valar”. This forbids the Númenóreans from ever sailing even farther west, out of sight of their island home, or setting foot upon the Undying Lands, where the Valar and select among the Elves dwell.

Men are mortal; the Elves and Valar are not. To sweeten the deal, Númenóreans are gifted a life span of hundreds of years, along with the promise of a peaceful existence on their paradisal island. Years of bliss follow as, protected by the Valar and enjoying their continuing friendship with the Eldar Elves, the people of Númenor prosper during the Second Age. 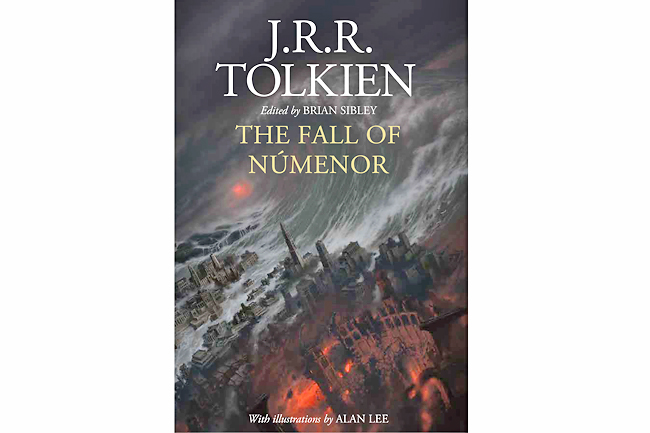 The account of this period of Númenórean history is longish and rather dull, despite the inclusion of a tale of ill-fated love. As Tolkien observes in The Hobbit, “Now it is a strange thing, that things that are good to have and days that are good to spend (are) not much to listen to; while things that are uncomfortable palpitating, and even gruesome, may make a good tale.”

Fortunately for readers, trouble is afoot elsewhere in Middle-earth, where Sauron, Morgoth’s most powerful servant, has re-emerged. He is defeated again, but not before the Rings of Power have been forged under his tutelage and dissent sowed between Elves and
Númenóreans.

By now, the Númenóreans, brilliant mariners, have developed a taste for colonisation and exploitation. They’ve grown impatient with the Ban of the Valar: Why shouldn’t they be immortal, too? “Ever guileful” Sauron (you didn’t really think he was dead, did you?) makes his way to Númenor. He uses three of his Nine Rings to ensnare powerful men (they eventually become Nazgûl) and encourages Númenor’s ruler to sail west and conquer the Undying Lands.

Here Tolkien’s uncomfortable palpitating and gruesome things are used to great effect, as the Númenórean people, obsessed with the necromantic arts, worship Melkor and fill “all the land with silent tombs in which the thought of death was enshrined with darkness”.

They enslave other men and especially Elves, whom they have come to hate for their immortality, and sacrifice them to Melkor (Alan Lee illustrates this in a chilling, understated painting). Only a small group of Númenóreans remain faithful to the Valar and plan to sail east to seek refuge with the Elves of Middle-earth.

If you’ve read The Lord of the Rings or watched The Rings of Power, much of which takes place in Númenor, you know it will not end well for those who dismiss the Valar. The Fall of Númenor serves as a fine companion to the continuing Amazon series – some among the Wise may well think it hath been planned thus. And devoted Tolkien readers will find much to amaze and delight them. My favourite tidbit pertains to the mysterious fate of the entwives, from a 1954 Tolkien letter: “Some of course, may have fled east, or even have become enslaved… If any survived so, they would indeed be far estranged from the Ents, and any rapprochement would be difficult – unless experience of industrialised and militarised agriculture had made them a little more anarchic. I hope so.”

Entwives as anarchist eco-warriors! One hopes the producers of The Rings of Power take note.

The Fall of Númenor would make a very nice holiday gift. But for especially deserving Tolkien fans, you might consider the sumptuous new edition of The Silmarillion, lavishly furnished with Tolkien’s paintings, drawings, embellishments and maps, plus an excerpt from The Tale of Túrin written in the Rúmilian alphabet used only by the elves in Valinor.

Tolkien was a talented artist whose work clearly shows the influence of Britain’s Arts and Crafts movement, equally at home with visionary landscapes and the decorative arts, as demonstrated by two jewel-toned drawings of Númenórean carpets.