Muang Satun Police Chief Colonel Pacharapol Na Nakorn said in the first incident at about 10.15pm, a bomb was believed to have exploded in a rubbish bin in front of Satun police station.

In the second incident at 10.50pm, he said another bomb placed on a motorcycle went off in the police station’s parking area.

“The bomb squad found the bombs used in the incident were homemade as there were no sharpnel found,” he said.

A car and a motorcycle in the police station car park were damaged in the incident.

Pacharapol said police also found a bomb in Makro Supermarket and succeeded in defusing it. 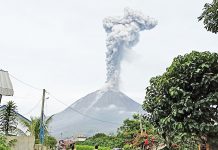