Despite the Sultanate still wary about COVID-19, the nation’s people showed up in large crowds and waited patiently at designated tents to meet and greet His Majesty.

“During the get-together, we heard the people wishing ‘Happy Birthday’ to His Majesty and asking about his health. It clearly shows the people’s concern for His Majesty’s well-being.”

LegCo member, Yang Berhormat Haji Ramli bin Haji Lahit as Penghulu of Mukim Telisai and Acting Penghulu of Mukim Ukong, said while countries across the globe are struggling to contain COVID-19, Brunei is blessed to have succeeded in managing the outbreak, thus allowing the country to hold such a mass gathering.

“During the event, we observed and adhered to standard operating procedures (SOPs) and guidelines issued by the Ministry of Health (MoH) to curb the pandemic.

“Alhamdulillah, even though the event was held in moderation with a small number of field performances, the gathering was lively and the attendees enthusiastic,” he said.

He said His Majesty’s wise leadership got the world to look at this small nation for ways to tackle COVID-19. 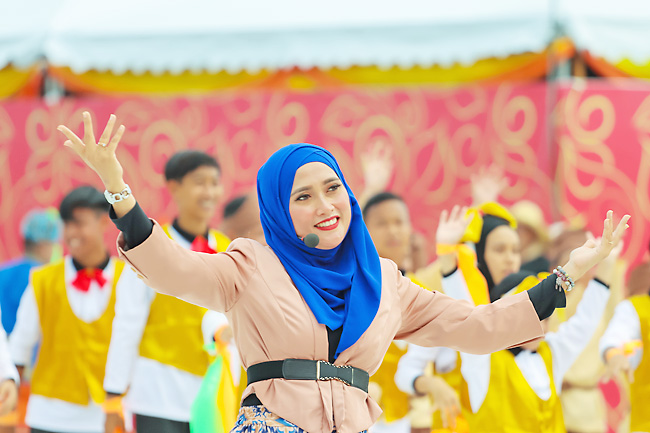 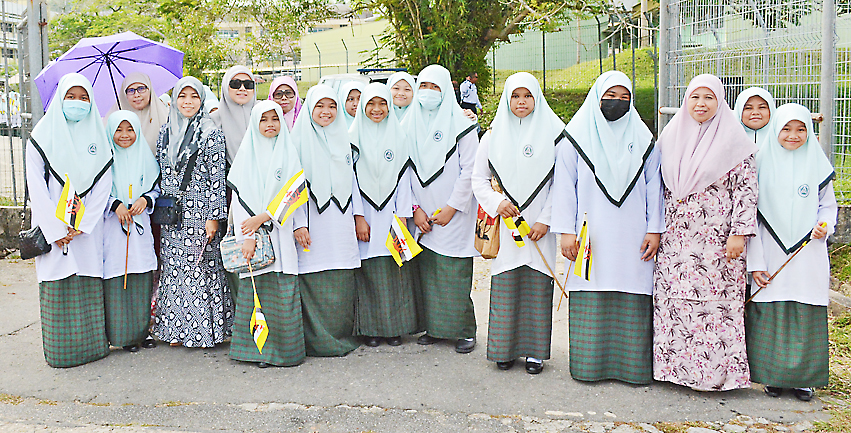 “Last year, the event was not held. Alhamdulillah, we can hold the gathering this year even though its on a smaller scale and under the new normal.

“The presence of well-wishers showed their care and concern for His Majesty. It is also a medium for Tutong residents to personally express gratitude and love for His Majesty for the facilities, assistance and efforts enjoyed by the people.”

PKWE Tutong member Haji Yanam bin Ismail, 81, in an interview with the Bulletin thanked His Majesty and prayed for the monarch’s good health, longevity as well as Brunei’s peace and stability.

Sang Jati Dusun Brunei was one of the troupes performing yesterday. They performed a dance called Ancayau accompanied by Ibang–Ibang drum beats (gendang) to welcome His Majesty.

He said the group is planning to organise a competition to design Sang Jati Dusun attire based on three colours – white, black and red – symbolising the warrior, strength and gallantry.

Among the performers was Muhammad Nurul Sallehin bin Haji Mamat from Bukit Beruang, who said, “It has been an honour and privilege to be part of the special performance. I was happy but at the same time apprehensive about performing before His Majesty.

“For the performance, we danced while singing. It was initially quite challenging but with practice, I overcame it.

“We trained for about a month and the experience was a memorable one.”

Meanwhile, singer Suzan Maidin expressed gratitude for being given the opportunity to showcase her abilities before the monarch.

She said, “I was nervous yet happy to be part of the team this year.

“Through regular training with Widuri, Leehin and Khai, all went according to plan.”

Apart from the gathering and performances, over 500 students from Sufri Bolkiah Secondary School lined the roads to welcome His Majesty and members of the royal family.

Teacher Saahdah Baryah said, “Every year, our students participate in the get-together by lining up the roads. Alhamdulillah, we were able to participate again this year, like usual. We were happy to be able to welcome His Majesty. It’s like a tradition to be here.”

Teacher Zul Ihsan said, “We are excited to be here and the students are thrilled. We arrived at our spot as early as 7am.”

Teacher Nor Sarita binti Haji Zainal from Pertama School Tutong also shared similar excitement. She said, “We are glad the event can be hosted this year. The students are excited to be here to welcome His Majesty.”

Around 70 students from the school were present to welcome His Majesty.