BIZERTE, TUNISIA (AFP) – Wading knee-deep in the calm waters of a lagoon, workers in northern Tunisia harvest red seaweed, in a nation dubbed a Mediterranean “trailblazer” in cultivating the in-demand plant.

Red seaweed or algae is used for gelling, thickening and texturing agents that are increasingly a substitute for animal-based products in processed foods, and it is also being used increasingly in cosmetics and pharmaceuticals.

The harvest, the Selt Marine company’s first on an industrial scale, comes after years of research and a wait of more than two decades for authorisation to use the lagoons, said French-Tunisian entrepreneur Mounir Bouklout.

Several countries including nearby Morocco have seen their natural reserves of red seaweed diminish in recent years due to overexploitation.

Instead near Bizerte, north of the Tunisian capital, 10 per cent of what is harvested goes back into the water, said Bouklout, another seaweed expert.

“We wait for nature to do its work, and after 45 days we harvest it,” Bouklout told AFP.

Surrounded by hills topped with wind turbines, workers pull seaweed growing around cylindrical netting from the lagoon and bring it to shore. 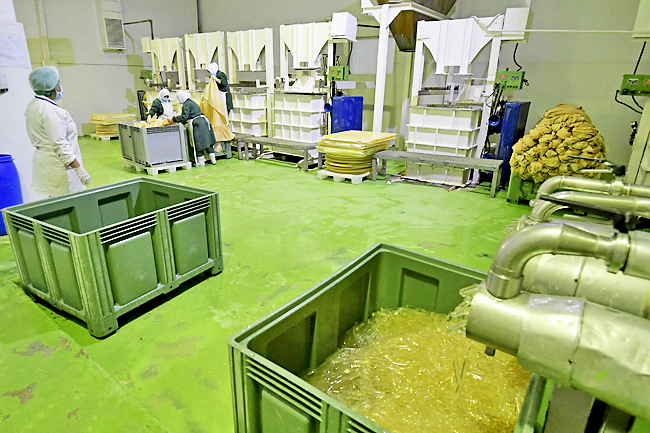 The plant matter, which ranges from green to dark red in colour, is separated, dried in the sun and taken to a factory to be turned into substances such as agar-agar.

The sought-after red variety is mainly grown in Asia, which is the world’s biggest producer, consumer and exporter of seaweed.

But Tunisia’s waters and climate also favour its farming, which can encourage the development of local marine life including shellfish.

Seaweed absorbs elements like nitrogen and phosphorous, so growing it is also a way of “naturally cleaning the lagoon”, Bouklout said.

He said the firm hoped to reap 500 tonnes of wet seaweed this harvest, with plans to rapidly expand the growing area in the coming years, eyeing a 3,500 tonne yield next year.

“Tunisia is a trailblazer” in cultivating seaweed in the Mediterranean, said aquaculture expert for the United Nations (UN) Food and Agriculture Organization (FAO) Houssam Hamza.

Selt Marine is the biggest grower of red seaweed in the region but also has expertise in “transforming the seaweed into different products” and adding value locally, he told AFP.

For 25 years, the business has been processing seaweed imported from Asia in the Tunis suburb of Ben Arous.

The plants are washed then heated to 90 degrees Celsius to obtain a liquid that is pressed, dried and crushed into a fine white powder.

Mixed with other ingredients, it is used in dairy products, cold meats, confectionery and other foods for local, European, Turkish and Chinese companies, Bouklout said.

Its potential is being studied for products from biodegradable bottles to noodles and even meat-substitute vegetarian nuggets, said biologist Mariem Mouheddine, head of research and development.

The business employs around 100 people, according to Bouklout, and hopes to expand to 500 over the next two years, in a country struck by an economic crisis and skyrocketing unemployment even before the coronavirus pandemic.

He said there was still work to do, including in promoting innovation in the sector, but “it’s also our role (of the FAO) to stand beside Tunisia” and its young people.